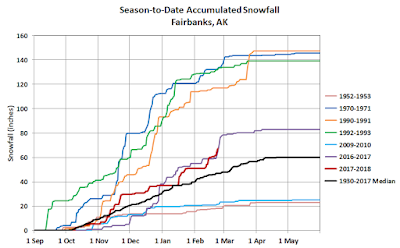 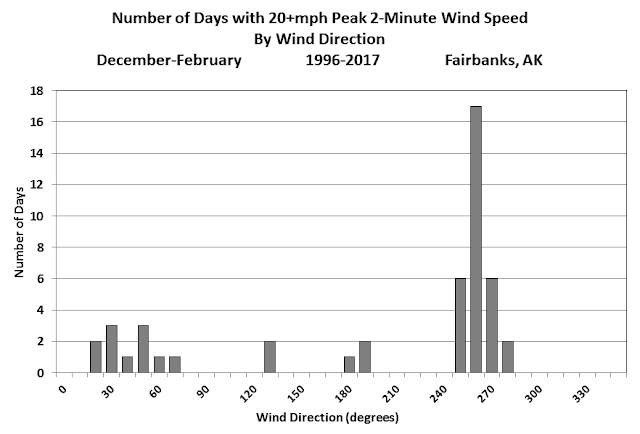 I added a new post this evening on the Alaska/North Pacific "Blob Tracker" Blog, discussing the potential for extraordinary warmth this summer in the North Pacific: 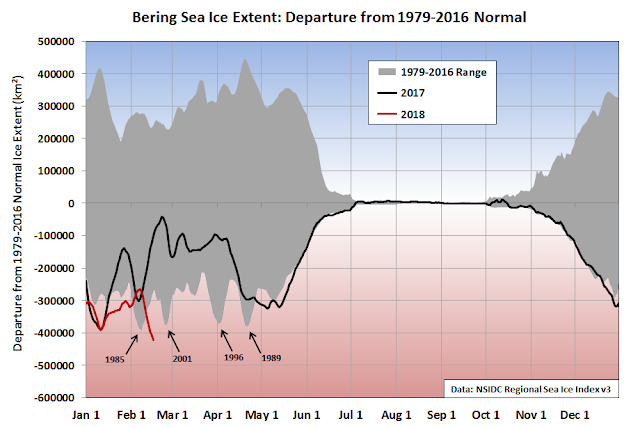 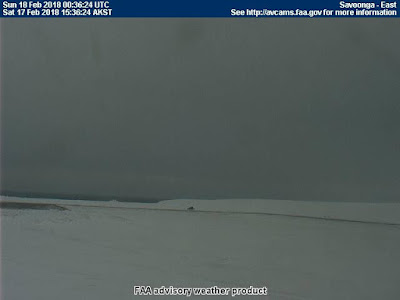 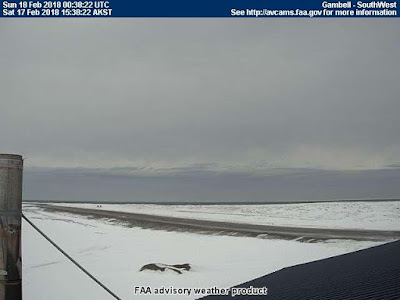 This is a few days late but still worthwhile as an interesting note, I think: late last week some very extreme temperature inversions were observed over Alaska's interior as a strong upper-level ridge moved eastward.  On Friday morning the balloon sounding at McGrath measured a temperature difference of 62°F between the surface (-21°F) and 3500' above ground (+41°F); this is the strongest inversion measured at McGrath since March 2008.

At Fairbanks the inversion strength peaked on Saturday morning, right under the ridge axis, with a temperature difference of 60°F between the surface (-19°F) and 3000' above ground (+41°F).  This is essentially a tie with the strongest inversion ever measured by radiosonde in Fairbanks; the record inversion was just 0.1°C stronger in December 1956.  Here's the so-called skew-T diagram.

Here are the 500mb maps from Friday and Saturday mornings (top and bottom respectively), showing the slow progress of the ridge eastward; the peak inversions were closely aligned with the central axis of the ridge. 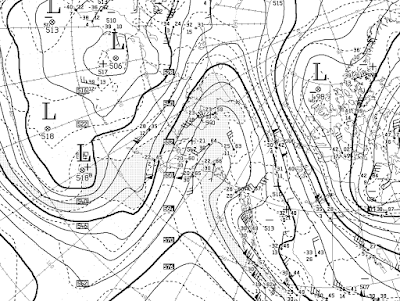 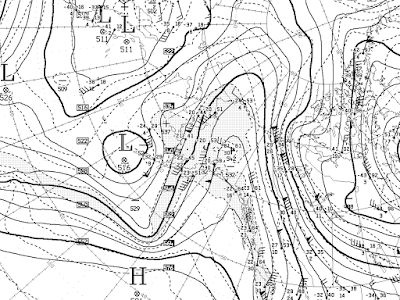 Rick Thoman posted a very remarkable map of Saturday morning temperatures around Fairbanks, showing a full 60°F of temperature difference at the surface in a distance of under 10 miles.  Locations in the hills were above freezing while some valley locations were in the -20s. 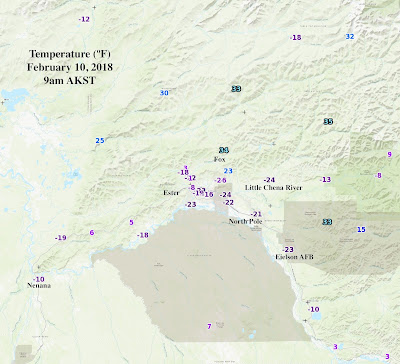 Looking at historical sounding data from Alaska's upper-air observing sites, the state record for inversion strength is 72°F at McGrath on January 13, 1966 (-41°F to +31°F).  McGrath has seen quite a number of occasions with inversions of more than 65°F, but on a typical winter day the inversion strength is greater in Fairbanks.

The chart below shows the all-time records (blue columns) for 13 sounding sites in Alaska that have been continuously active since around 1950, and the red columns indicate the 1981-2017 median inversion strength for morning (3 am) soundings in winter (December through February).  Only Annette Island has a median of zero, i.e. the average winter 3am sounding does not show an inversion. 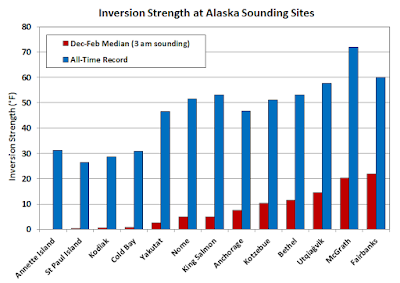 How about the depth of inversions?  In general, stronger inversions are deeper, and so Fairbanks, McGrath, and Utqiaġvik (Barrow) are the winners for both strong and deep winter inversions.  The chart below shows the record and median values for inversion depth. 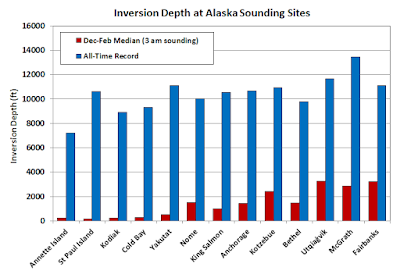 An interesting side note is that upper air observations were made at Northway from 1948 to 1955 and at Barter Island from 1953 through 1988, and both of these sites observed some very strong inversions.  In just a few years at Northway a number of 60+°F inversions were observed, with the record being 68°F of inversion on January 24, 1952.  The record at Barter Island was 64°F on January 25, 1983.

Posted by Richard James at 6:25 PM No comments: 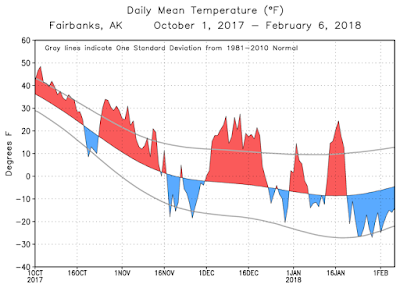 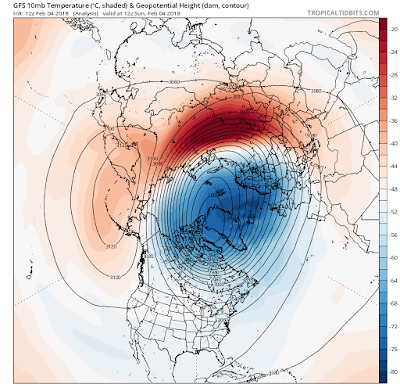 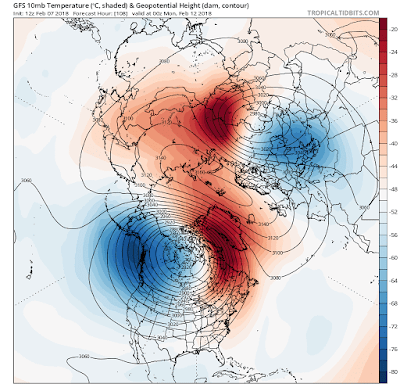 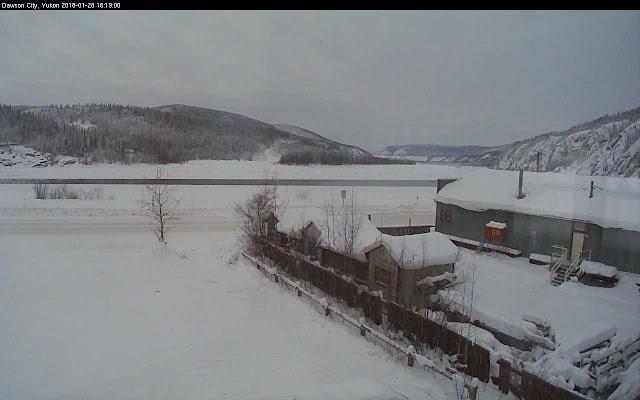 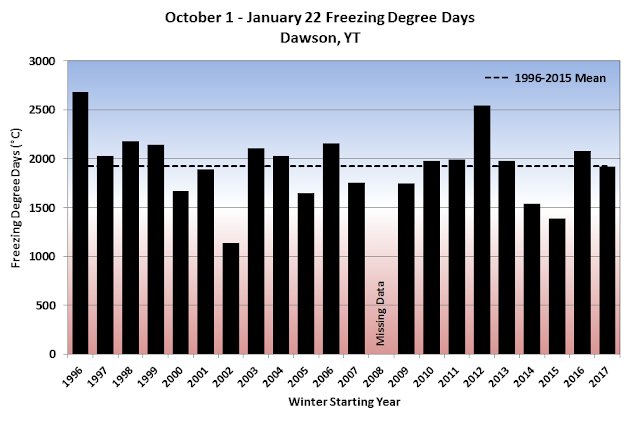