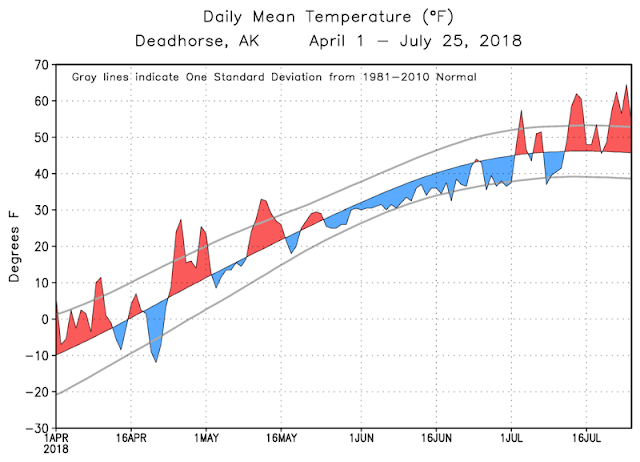 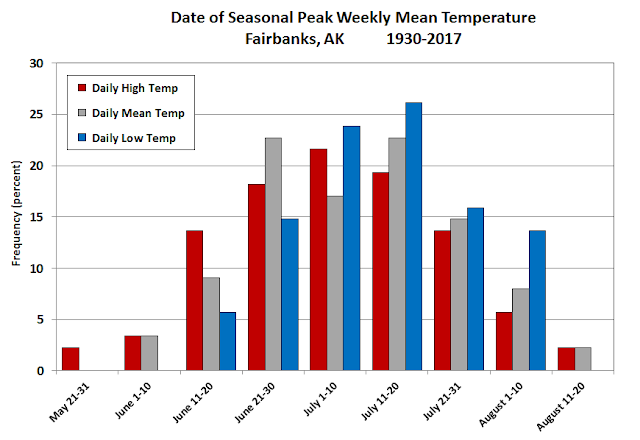 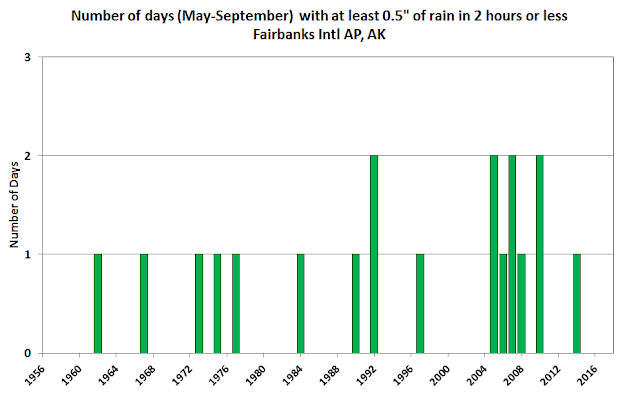 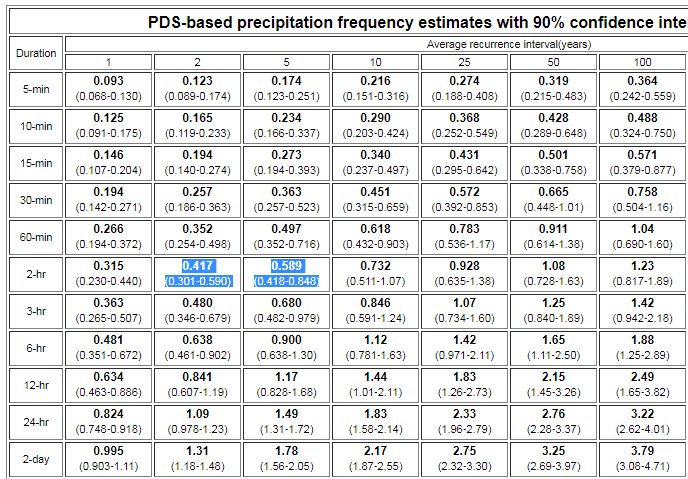 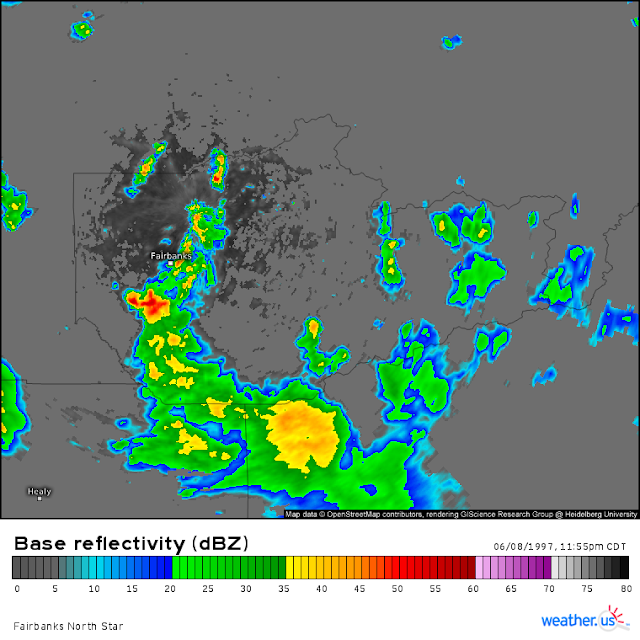 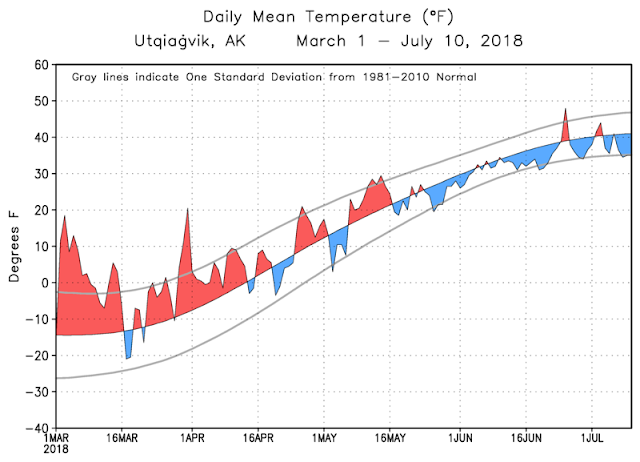 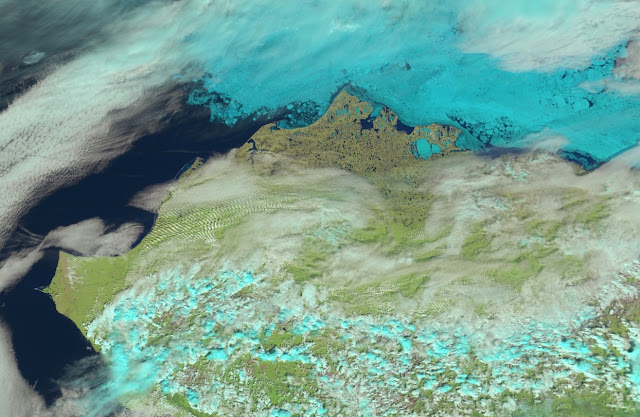 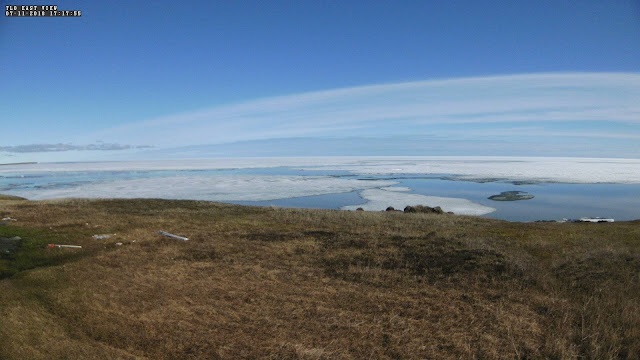 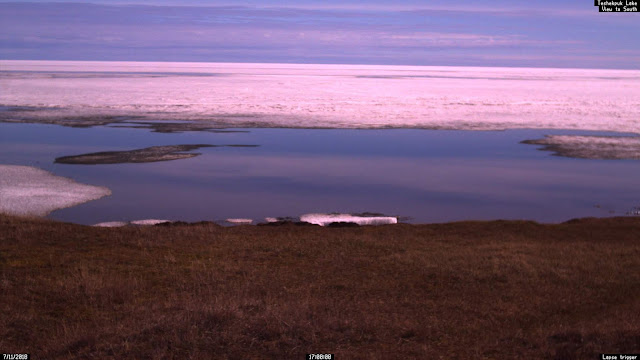 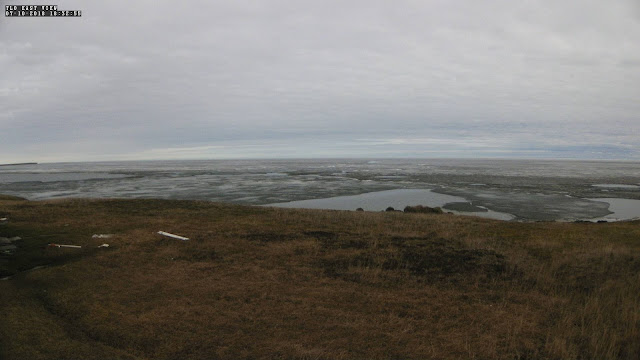 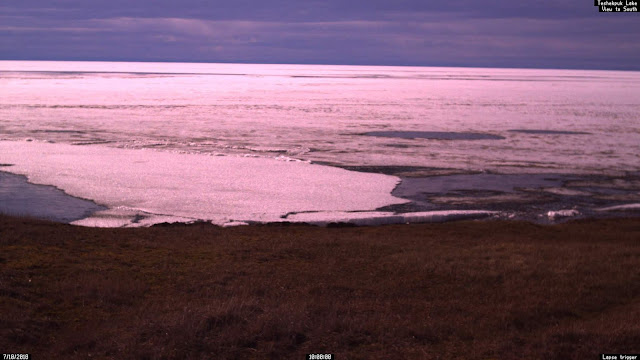 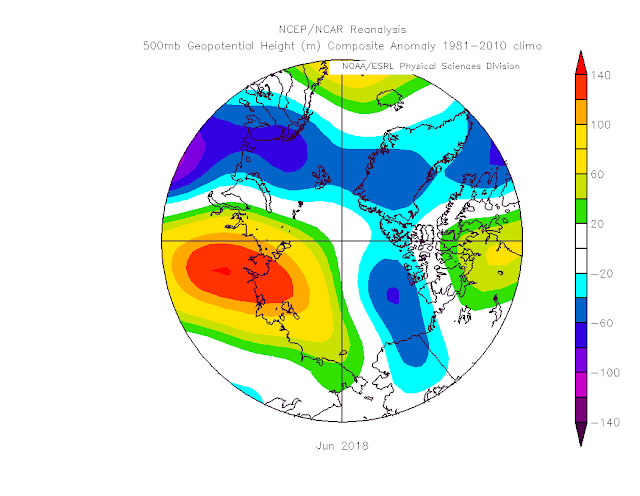 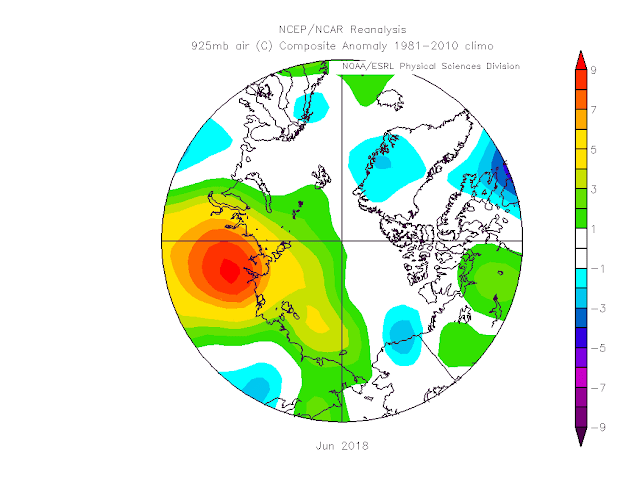 There has been a lot of talk in climate circles about the possibility of a new El Niño episode developing in the Pacific Ocean over the coming months, and this could become an influence on Alaska's weather patterns during the autumn and winter.  Of course it was only two years ago that the very strong El Niño of 2015-2016 ended, so I think it would be surprising to see another major episode so soon; but there is a strong consensus among the seasonal forecast models that a significant El Niño is on the way.  Here's the sea surface temperature (SST) forecast for early winter from the NMME models: 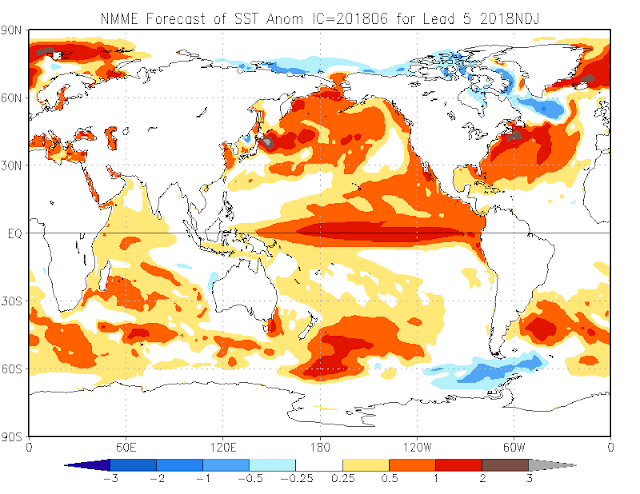 The models expect the warmest SSTs, relative to normal, in the central equatorial Pacific, and this has also given rise to a bit of speculation that the coming El Niño (if it happens) may be more of a "Modoki" variety than a classic episode.  El Niño Modoki is sometimes considered to be a distinct climate phenomenon in which warming occurs in the central portions of the equatorial Pacific, as opposed to the classic El Niño pattern that involves the most pronounced warming in the east.  However, others emphasize that the Modoki versus classic distinction is really a continuum and is mostly related to the strength of the warming episode.

Regardless of the semantics, it's interesting to compare the winter climate patterns between central-Pacific and eastern-Pacific El Niño's.  The Aleutian Low is usually stronger than normal during strong classic El Niño winters, and there is a pronounced low pressure anomaly centered to the south of the Alaska Peninsula, as shown in the map below.  The years listed here were obtained by taking the top El Niño winters (based on the Multivariate ENSO Index) that were not also top-10 Modoki episodes (based on the El Niño Modoki Index). 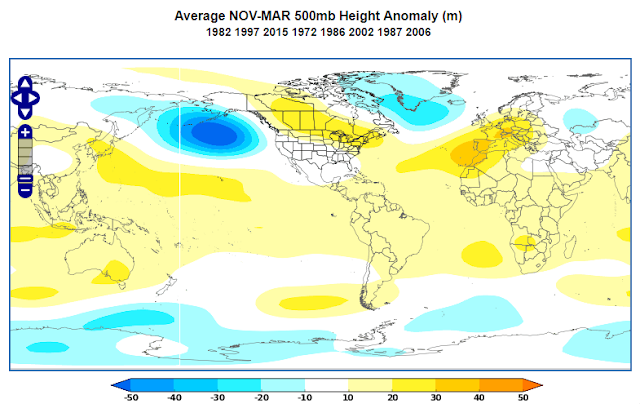 Enhanced southerly flow associated with the strong Aleutian trough tends to bring warmer than normal conditions to much of Alaska. 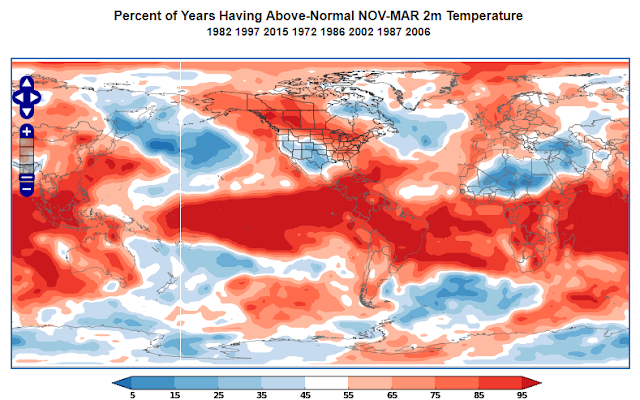 El Niño Modoki winters look very different; rather than showing a strong Aleutian Low, there's a notable tendency for high pressure from the Bering Sea to southern Alaska.  It also tends to be warmer than normal over the Bering Sea and surrounding areas (see maps below).  Note that these years are the top Modoki events that did not also have top-10 Niño3 (eastern equatorial Pacific) SST anomalies; so by definition they are also not strong El Niño episodes.  We might think of them as weak-to-moderate warming episodes that were clearly focused on the central equatorial Pacific. 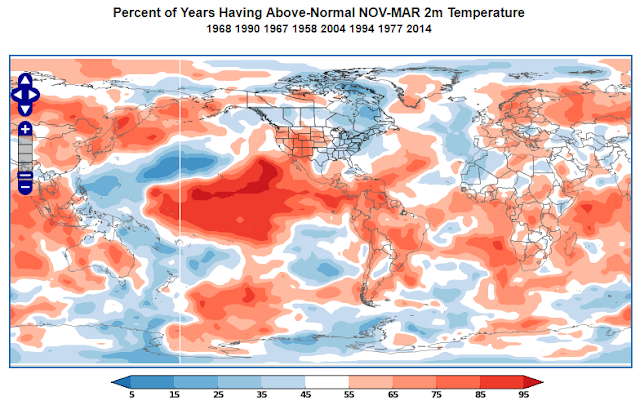 As we consider which "flavor" of El Niño might be more likely this year, we can ask how the current global SST pattern compares to the typical precursor patterns for the two varieties.  First, the map below shows the SST pattern in June and July prior to east-Pacific El Niño's.  The central and eastern tropical Pacific tend to be warmer than normal already by this time of year, and there's also a strong warm signal in the Indian Ocean. 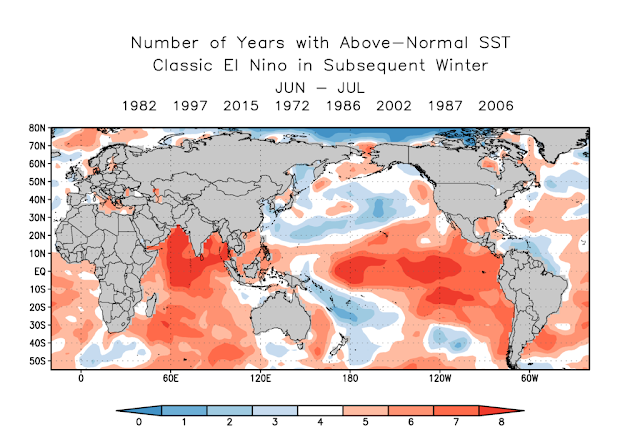 Does this resemble the current setup?  Not at all; June SSTs were near-normal in the Indian Ocean and near or even slightly below normal in the eastern Pacific. 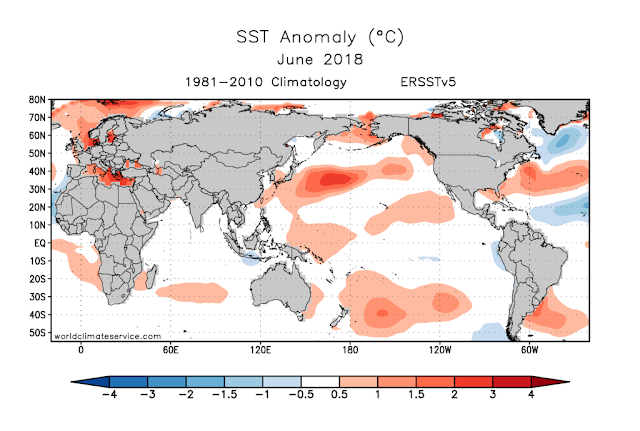 The map below shows the pattern for summers preceding Modoki episodes; there tends to be warmth in the central Pacific and also - interestingly - in the northern North Pacific, and especially the Gulf of Alaska.  Overall this is a lot more consistent with the current pattern, and so this fits with the idea that El Niño, if it does emerge and persist into winter, is more likely to be a central-Pacific episode.  It will be interesting to see how it plays out. 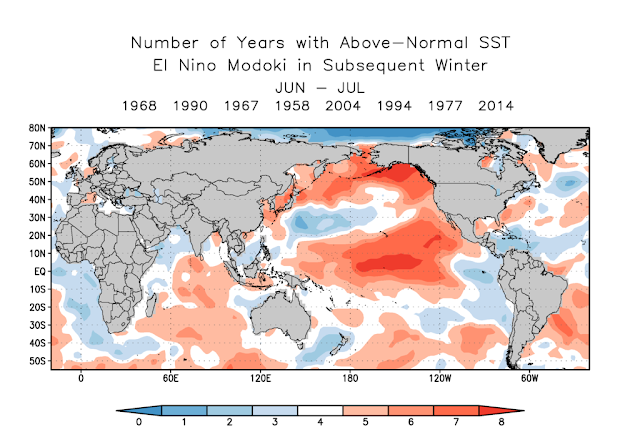