Most areas of Northern and Interior Alaska have already received their first measurable snowfall this season. Even the Anchorage Bowl (except the official climate site) had a rare early season snowfall late last month. Looking back through the historical record, I decided to put together a map of average (not 'normal') first measurable snow dates.

For this analysis, a station had to have 15 complete years of snowfall data (July 1 to June 30). The 15 years were not required to be consecutive nor contemporary. It took several iterations of analysis to pin down a methodology that filtered out years with too much missing data. Even still, there are still many instances where data were not entered into the GHCN database properly. Still, the calculated data for most stations appears pretty reasonable. The map shows the results of the interpolation from the 189 stations used in the analysis. A 6-point inverse distance weighted surfacing technique was utilized to smooth out the data for the map. Below the map, is a table of all the dates (unsmoothed). To deal with leap years, I calculated the number of days after June 30th that the first measurable snowfall occurred. The table contains the average of those Julian dates and a conversion to calendar dates. For reference, September 1st is day #63, October 1st is day #93, and November 1st is day #124. (Hopefully the length of the table isn't too distracting. If it is, I will change it. 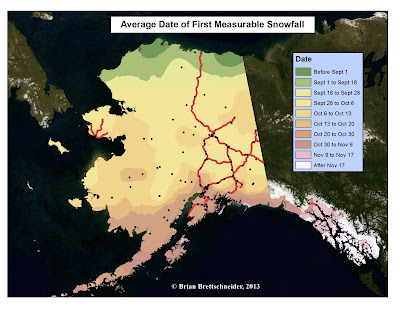