The entire state of Alaska is experiencing unseasonable warmth this morning, and forecasts show very unusual warmth continuing throughout the interior and north this week.  For example, the National Weather Service forecast for Fairbanks airport indicates a high temperature of 50 °F on Wednesday and overnight minima of 37 °F on Wednesday and Thursday nights.  This is extremely unusual for the time of year.  A daily minimum temperature above 33 °F hasn't been observed after October 15 since 1981 in Fairbanks, and high temperatures of 50 °F or higher are very unusual for the second half of October.  The chart below shows the climatological (1930-2012) probability of reaching the temperature on the x-axis after October 15 in Fairbanks, showing that 50 °F is reached in slightly more than 10 percent of all years. 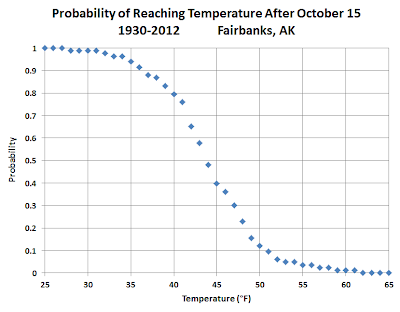 The chart above doesn't quite give the whole picture, however, because in fact 50+ temperatures have become rare in recent decades; the second chart below shows the annual values for the maximum temperature after October 15.  Interestingly, 50 °F was reached 9 times between 1930 and 1980, but only once in the years since; the more recent climate has produced these warm events less often.  This is consistent with the fact that October is the only month of the year that shows a long-term cooling trend in Fairbanks; the other 11 months show warming (and most at a much greater rate than October has cooled).

It will be interesting to compare the current warm event to some of the historical events - particularly that of 1938, when the temperature reached 61 °F on October 20 and overnight minima were 40 °F or higher for five consecutive days. 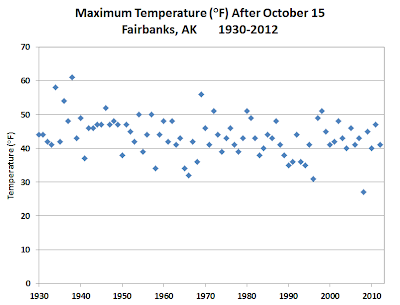 Posted by Richard James at 8:17 AM