Temperatures in Fairbanks continue to run far above normal, as illustrated by the fact that this morning's 5 a.m. temperature of 19 °F is equivalent to the normal high temperature for this date.  An increasingly large contributor to this anomaly is the lack of snow cover, which profoundly influences the balance of infrared radiation and temperature at the earth's surface.  I thought it would be interesting to see how strongly snow depth is correlated with temperature in the autumn and early winter in Fairbanks - see the chart below.  Note that I've calculated each category's median temperature only for dates with 10 or more years available; and the anomalies are all with respect to the 1981-2010 normals.

When snow cover is absent or merely a trace in Fairbanks (blue line), the temperature tends to be increasingly above normal as October proceeds; this reflects the increasing departure from normal that the lack of snow represents.  Of course, this is a chicken and egg problem: do the warm temperatures cause lack of snow, or vice versa?  It's both, but as the season advances, a lack of snow becomes an increasingly unusual influence that prevents valley-level temperatures from dropping as they normally do.  Also, by late October even well above normal temperatures are not normally a hindrance to snow accumulation (this year being an extreme outlier with such abnormal warmth). 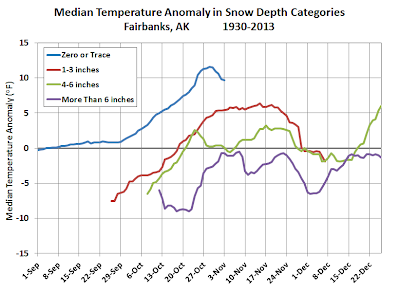 It's also interesting to see that prior to about 18 October, a thin snow cover (1-3") is associated with below-normal temperatures, but after that date it is more often observed with unusual warmth.  This is simply because thin snow cover is greater than is usually observed at the earlier dates, but becomes less than usual later.  The same is true for 4-6 inch snow depth; but snow more than 6 inches deep is associated with colder than normal temperatures throughout the autumn and early winter, and especially in October.

Posted by Richard James at 5:47 AM