The lack of snow in Interior is becoming quite notable. Fairbanks has had just 0.8" of snow for the season, and even higher elevations (least below 3500' MSL) that had significant snow in September and early October have lost it thanks to what we now know from Richard's analysis to be the third warmest late October warm spell of record.

Thus far, Fairbanks Airport has had any snow on the ground just one day this autumn, a trace on September 22nd. So how unusual is it to get to the last third of October without having had even one day with measurable snow on the ground? Below is a histogram of the first autumn date with a snow depth of 1" or more (this is NOT necessarily the date of establishment of the permanent winter snow cover). As you can see, we are moving into the late tail of the distribution. If, as seems likely, we get to Wednesday without an inch or more snow cover at the Airport, then this would move into a "top 10" latest first inch. The latest, and only occurrence in November (in the WB/NWS era since 1930) is November 6, 1938. 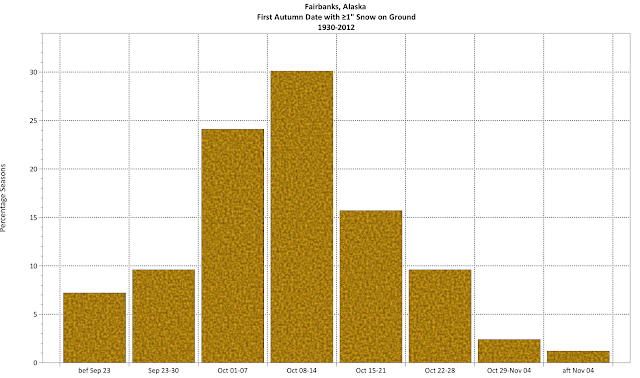 One caveat on the data here: snow depth is not, for climate purposed, monitored continuously. These dates are the snow depth at whatever the standard time for recording this element has been, and this as varied over the past 80 plus years (currently it's the snow depth at midnight).
Posted by Rick at 6:09 AM