Fairbanks has just passed the date on the calendar when the climatological average diurnal range (the difference between the daily high and low temperatures) is smallest.  At the airport observing site, the minimum diurnal range is just under 15 °F and is smallest around October 21, according to the NCDC 1981-2010 climate normals.

The chart below shows the annual cycle in diurnal range for Fairbanks, Anchorage, and Barrow.  Of these three locations, the average diurnal range is highest at Fairbanks throughout the year, because cloudiness and relative humidity are usually much lower in the Alaskan interior than on the coasts; the relatively clear skies and low humidity in Fairbanks allow the temperature to show a greater response to the daily cycle in solar insolation (except in mid-winter).  Also, in Fairbanks in winter, changes in cloudiness within a 24-hour period can bring large changes in temperature, whereas in Anchorage and Barrow the generally more persistent cloudiness makes large daily changes of this kind less common. 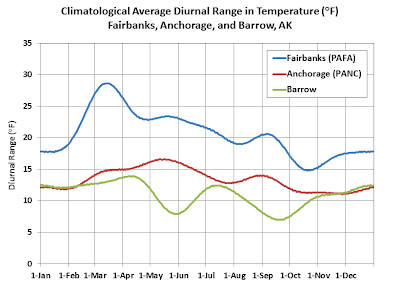 But how do we explain the October minimum in diurnal range in Fairbanks?  I can think of three ingredients for a small average diurnal range:
Clearly there is a decreasing solar angle as autumn advances, and it's possible that cloudiness also increases from September to October in Fairbanks.  I don't have cloud cover data to back this up, but we've seen before that there is a peak in precipitation frequency in October.  In fact, the diurnal cycle is nearly inverse to the precipitation frequency in late summer and autumn, with a minimum diurnal range in August associated with damp weather, a maximum in September associated with drier conditions, and then a decline in October associated with more frequent precipitation again.

Finally, snow depth is typically not great in October in Fairbanks - and of course in some years may be non-existent.  If the ground remained snow-free for the rest of the year, then it's likely that the diurnal range would continue to decrease; but as snow depth builds in early winter in Fairbanks, then nighttime cooling increases and the diurnal range picks up again.  At least, that's my interpretation of what's going on.

The rapid increase in average diurnal range in late winter in Fairbanks is undoubtedly due to the return of the sun, combined with a typically deep snow cover and generally clear skies; all three factors favor large temperature swings between day and night.

It seems that some of the same basic physics comes into play in Barrow and Anchorage, as the diurnal range minimizes near the onset of winter and then increases in mid-winter (slightly in Anchorage) and again in spring.  However, I'm not sure what to make of the early summer variations in Barrow; any suggestions would be welcome.

To round out the analysis, below are maps showing the minimum diurnal range and the date of the minimum.  The annual minimum in diurnal range tends to progress southeastward across the state through the autumn and winter, with some Pacific coastal locations seeing their least variable daily temperatures after the turn of the year. 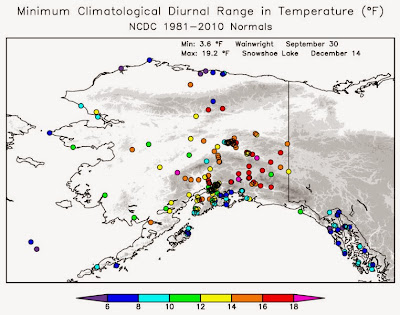 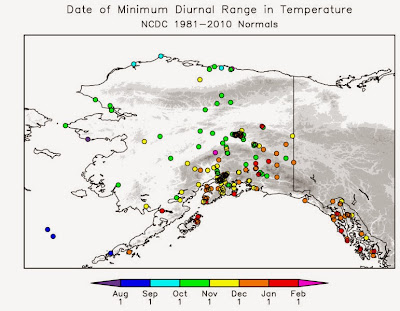