In view of the exceptionally warm weather of the past week or so across interior Alaska, I thought it would be interesting to look at similar past events to see if the history reveals any consistent patterns in the subsequent weeks.  In other words, how does the weather typically evolve after unusual warmth at this time of year?  I looked up the warmest weeks ending between October 10th and 31st in Fairbanks, based on the mean daily temperature departure from the 1981-2010 daily climate normals.  Here's the list of weeks (only one per year allowed) along with the temperature anomaly in terms of standard deviations:

The chart below shows the temperature anomaly over the 60 days following the end of each warm week, with each line representing a different year.  Admittedly it's a bit difficult to follow each individual year with so many lines, but focus on the thick black line which shows the median of the 10 years.  It's no surprise to see that temperatures tend to stay above normal for several weeks after a very warm October week in Fairbanks.  However, it's interesting that the median reaches its highest point at four weeks (28-29 days) after the end of the warm October week; indeed, several of the historical events (e.g. 2002, 1936, 1957, 1981, 1938) produced very warm conditions again (relative to normal of course) in the period from about 3 to 5 weeks later.  In fact, only 3 of the 10 years were not significantly above-normal in that period (1942, 1969, 1987).  This could be a statistical quirk, but it's not unreasonable to imagine that a natural periodicity in the global circulation might favor the reintensification of a pronounced feature such as the ridge over the northeast Pacific. 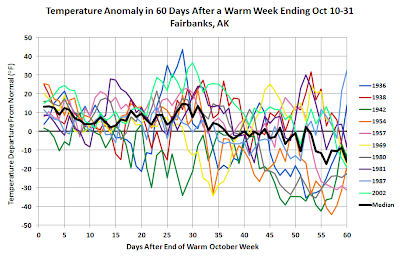 The other interesting aspect of the data is that half of the years experienced significantly below-normal temperatures around 8 weeks after the end of the warm October week; so there is no suggestion that unusual warmth is likely to linger into a second month.

In summary, the history of similar past events appears to suggest that relatively warm conditions are quite likely to continue in Fairbanks for another 4-5 weeks, but by mid-December it's entirely possible that below-normal temperatures will emerge.