The New Normals are Here 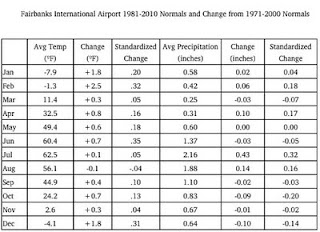 Eagerly awaited by climate fans everywhere, the 1981-2010 normals were released by the National Climatic Data Center earlier this month. Starting August 1, these will replace the 1971-2000 normals in the United States. Here is a quick look at the new normals for Fairbanks and how they have changed from the 1971-2000 set.

The warming in winter continues as the cold winters of the early and mid 1970s have dropped off, and this set comprises almost entirely the warm phase of the PDO. The other big temperature change is in June. Although not large in absolute terms, it is the largest standardized change of any month. This reflects the fact that temperatures don't vary nearly as much in summer as in winter. This early summer warming directly ties in with increased fire seasons.