Wintry conditions have arrived early this year in the higher elevations of the Brooks Range, as evidenced by webcam photos taken this afternoon at the Chandalar Shelf DOT site (elevation 3285'), Anaktuvuk Pass (2171'), and Toolik Field Station (2493'). 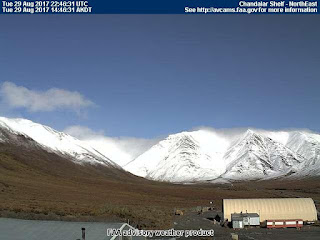 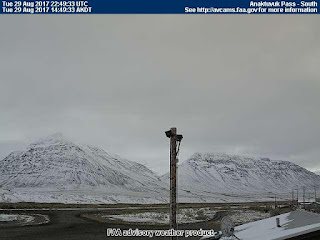 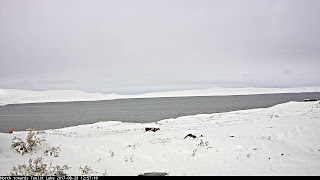 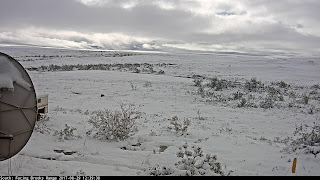 The Atigun Pass SNOTEL site is reporting a healthy snow depth of 8", and this is certainly plausible based on mostly sub-freezing temperatures for several days and the webcam views above.

This will be the 10th winter with a snow depth sensor installed at the Atigun Pass SNOTEL instrument array, and so we can look at the recent history of daily snow depth in August and September - see the chart below. 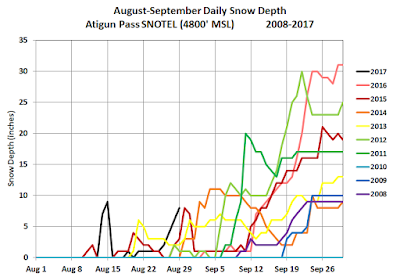 With the exception of last year, snow has been reported on the ground in August of each year since 2012, and 2015 also saw 8" on August 30, so the current conditions are not particularly unusual.  The 9" snow depth that was reported earlier this month on August 15 seems a little suspicious, although temperatures were certainly low enough and a little snow was evident on regional webcams at that time: 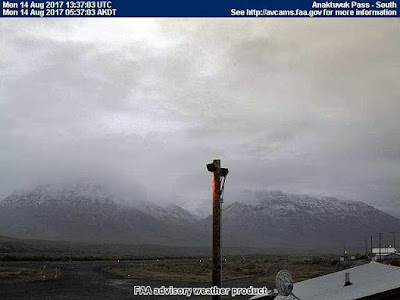 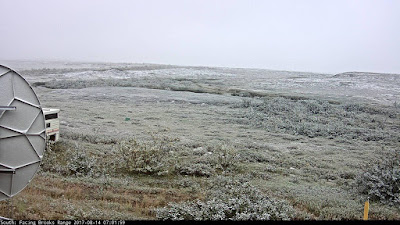 A curious feature of the chart above is that August snow was not reported in 2008-2011, and if we plot the first date of 4" snow depth, a rather striking trend jumps out - see below.  Based on this very brief history, significant snow has arrived earlier in the most recent years; but if we had a longer history, I imagine it would show that 2008-2012 were unusual for the lateness of the snow.  Given that temperature (and of course precipitation) data go back to 1999, it would be an interesting exercise to estimate when snow arrived for earlier years. 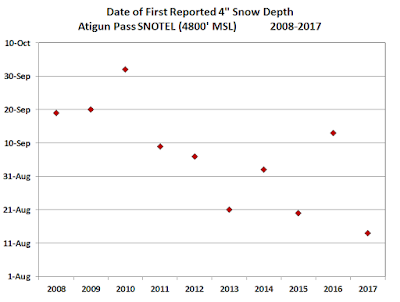