My last post made mention of the plain rain (no snow) that fell in Fairbanks last Friday, and Monday of this week brought a second and heavier round of late autumn rainfall: 0.25" of liquid fell onto nearly bare ground accompanied by only a trace of snowfall.  It is very rare - in fact unprecedented in the Weather Bureau/NWS era (1930-present) - to have this much rain falling on essentially bare ground at this late date in the autumn.

Based on 2-day rainfall totals, the previous record for latest date with this much plain rain (trace or zero snow) falling on bare ground (trace or zero snow depth) was October 23-24 of 1981, when more than a quarter-inch of rain occurred together with temperatures as high as 49°F.  More recently, a similar amount fell over 3 days ending on October 29 in 2013.  My post from the time noted that the 2013 event was the latest on record for plain rain (any amount) with zero snow on the ground, and that record still stands as there has been a small amount of snow remaining on the ground this week in Fairbanks.

The chart below shows an attempt to visualize the historical occurrences of out-of-season rainfall on bare ground in Fairbanks.  I've used 2-day rainfall totals to capture events that span the midnight boundary, and the markers show all rain events from October 1 through May 15 in which (a) no more than a trace of snow fell, and (b) there was no more than a trace of snow on the ground.  Note that I required conditions (a) and (b) for both of the 2 days; for the sake of simplicity I've excluded events for which 1 of the 2 days had snow. 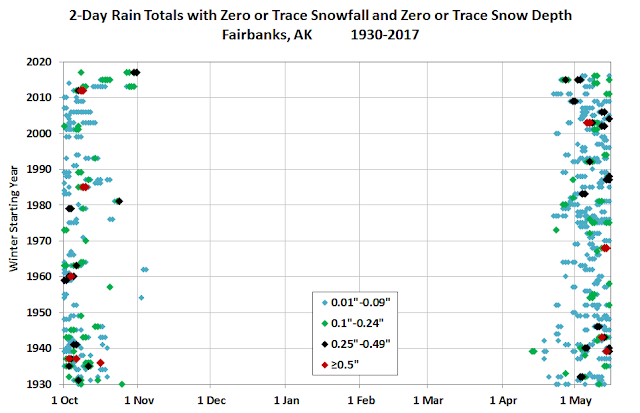 It's clear that plain rain on bare ground is (or used to be) rare after mid-October, and the only instances that occurred in November were in 1954 and 1962; both of these were light events.  However, 3 of the past 5 years have now seen significant "plain rain" events after mid-October.  Looking at the other side of winter, it's interesting to note that the past several years have also seen a few significant rain events relatively early in the year; in fact the top 3 early and late events have all occurred since 2010.

The top 3 separate rain-on-bare-ground events after October 25 are:

and for spring the top 3 events prior to May 4 are:

For those who are interested, the sequence of maps below shows the progression of the 500mb flow in association with Monday's rain event.  The maps show the analysis at 4pm AKDT Sunday (top), 4am Monday (middle), and 4pm Monday (bottom).  Remarkably, most of the 0.25" of rain fell between 8am and 11am on Monday, or half way between the 2nd and 3rd maps - i.e. just as the vigorous upper-level low was moving into the Y-K Delta region.  Note the very long fetch of warm air being drawn up from the south around the ridge over the northeastern Pacific.  Not only was this an extremely warm air mass (hence the lack of snow), but it was moisture-laden and suitable for generating heavy precipitation. 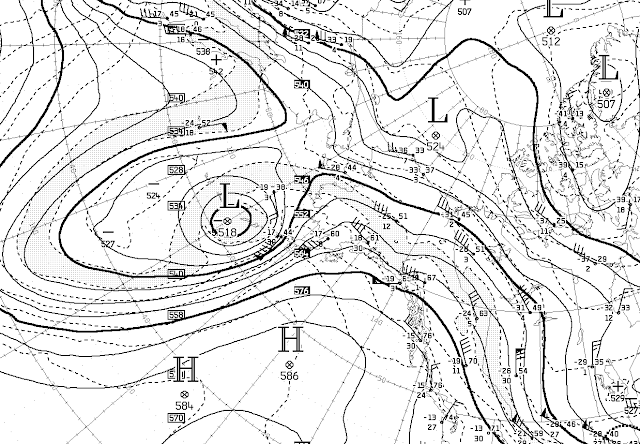 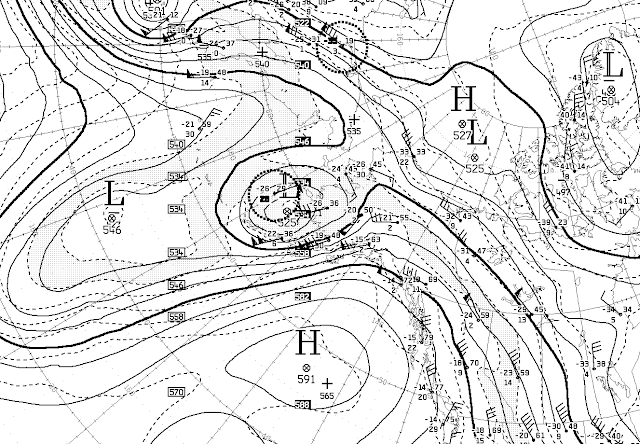 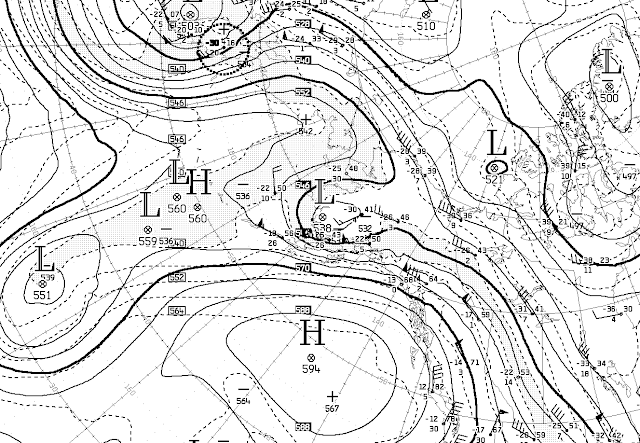 Courtesy of Gary's comment and San Francisco State University, I've added below the 300mb wind maps from 4am and 10am on Monday.  Note the strong jet stream flow impinging on the southern interior.  The second map shows that Fairbanks was located close to the nose of the jet and perhaps a little to the left of the jet axis, at the time of the heavy rainfall; the "left exit" region of a jet stream maximum is a favorable zone for producing heavy precipitation.

Here's a 2-hour radar animation ending at 9am on Monday, courtesy of Plymouth State University.