A deep winter chill has descended upon much of Alaska this weekend, with temperatures dropping well below zero in the usual cold spots.  So far Fairbanks airport has dropped to -34°F, which is colder than anything that occurred last winter.  Of course it is a rare winter in Fairbanks that doesn't drop to at least -35°F at some point.

A few other cold spots today are:

The Fortymile River HADS site (on the Taylor Highway) did not rise above -40°F today, and with the cold expected to deepen somewhat in the next few days, I'd be very surprised if Chicken doesn't crack -50°F.  Only two winters in Chicken's climate record (1996-present) have failed to reached -50°F, and -60°F or colder occurs in about half of all winters.

Alaska's snow pack is below normal in many places, but one area with plenty of snow is the upper Koyukuk region; observers from Bettles up to Wiseman are reporting 30" or more of snow on the ground (click to enlarge maps below). 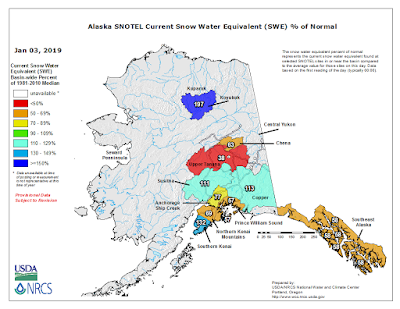 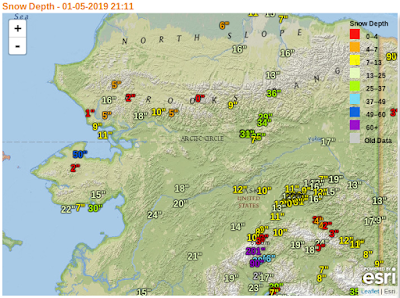 Remarkably, Bettles had its snowiest calendar month on record in December, with 62" of snow.  The typical annual snowfall in Bettles is close to 90" - fairly high for an interior valley location - but nevertheless 60" in a month is a lot.

A scatter plot of December snowfall and average temperature in Bettles shows a slight positive correlation, as the coldest months tend to be drier than normal; this is partly because the coldest Arctic air masses hold little moisture in winter, and partly because clear skies (associated with high pressure and dry weather) produce sustained temperature inversion and cold conditions at this time of year. 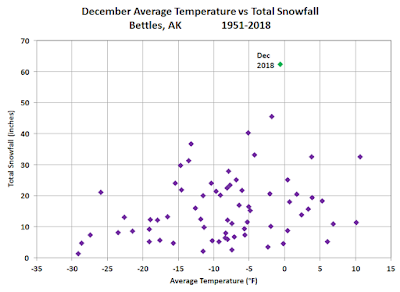 As we've noted before, the situation is quite different in Fairbanks owing to the effect of dry chinook winds from the south.  The proximity of the Alaska Range means that the warmest months, which are dominated by southerly flow, also tend to be dry, and so the snow-temperature plot shows a peak in snowfall at near-normal temperatures. 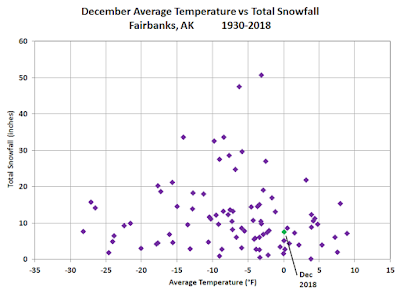