In the past week I've been digging deeper into the CERES radiation data for Alaska (see the previous post) and making some interesting discoveries along the way.  It really is quite fascinating - at least to me - to explore a new data set that deals with aspects of the climate that most of us don't often think about.

There's too much to discuss in one post, so here I'll focus on a few monthly averages over the period of record for just a couple of locations.  The chart below, for the Fairbanks area, shows the monthly average downward shortwave radiation at the surface, or simply the incoming "solar radiation" at the surface.  The CERES data set provides one set of numbers for a grid point near Fairbanks, and we can compare these to data from the high-quality Climate Reference Network (CRN) site just to the northeast of the city. 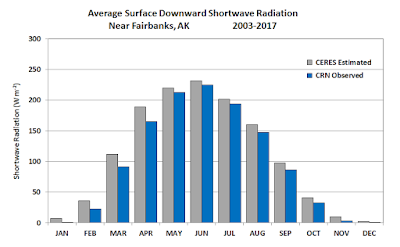 Interestingly the CERES numbers are consistently a bit higher, and especially so in March and April.  Some of the difference could arise from shading of the CRN site by nearby hills, but more investigation would be needed to find out how much solar energy is lost this way.  The larger difference in March and April looks more like a systematic bias that could be related to reflection and scattering of solar radiation from the snow-covered ground; perhaps there is locally more reflection and then downward scattering of the sun's rays at the CRN site than the CERES model estimates for the broad area contained in the (1x1 degree) grid box.

Here's the same chart for Utqiaġvik, formerly Barrow.  As expected the summer peak is narrower, but it's also higher than in Fairbanks; despite more abundant cloud cover on the Arctic coast, longer daylight hours allow Utqiaġvik to see more direct solar energy than Fairbanks in May and June (and July according to CERES).  The same positive bias is observed in the CERES data relative to the CRN site just a few miles outside Utqiaġvik. 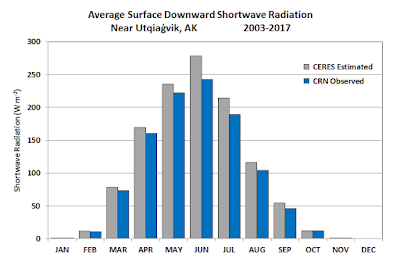 As discussed in the previous post, longwave (infrared) radiation is just as important for the climate as direct solar radiation.  I'll illustrate this in more detail in the next post, but for now the chart below shows the overall surface radiation budget (longwave and shortwave combined) for the same two locations. 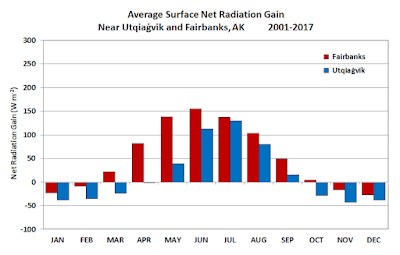 The most striking difference between Fairbanks and Utqiaġvik is seen in spring, as Fairbanks quickly sees a building surplus of energy in April and May, while Utqiaġvik really struggles to gain any ground in terms of radiative transfer until high summer - at least according to the CERES data.  The main reason is quite obvious: the universal snow and ice cover around Utqiaġvik create a high albedo in April and May, so the spring sunshine is largely reflected in the north, whereas the generally wooded environment and earlier snowmelt near Fairbanks allow for much more efficient absorption at this time of year.

The time series of CERES and CRN data also reveal some very interesting results over the ~15 year history, but I'll document these in another post.