Another round of heavy rain fell across the central interior late last week, taking the month's rainfall total to over 5 inches in Fairbanks, and exacerbating flood problems in the area.  According to the NWS, the Salcha River to the southeast of Fairbanks is the highest it's been since 2014 (the wettest summer of record in Fairbanks); here's the hydrograph: 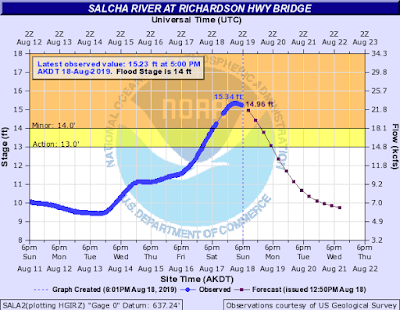 A webcam view of the Tanana River at Nenana from yesterday morning (the latest available) shows a rather swollen river, and according to the NWS there is some flooding in the town. 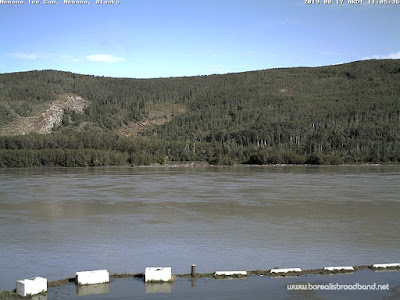 Only a couple of years in the past have seen so much rain in Fairbanks in the entire month of August, with one of course being the flood year of 1967.  With flood control measures now in place, a repeat of that flood will not occur in Fairbanks, and indeed the Moose Creek Dam is operating tonight to regulate the Chena River flow volume.

Readers in south-central Alaska may well wish that some of the rain would make its way south of the Alaska Range, because while Fairbanks is near-record wet, Anchorage has seen no measurable rainfall at all this month so far.  This is an extraordinary contrast: Fairbanks is second-wettest on record for the month to date (only lagging 1967), while Anchorage is record dry.  The chart below shows August 1-17 rainfall totals for the two cities over their common climate history since 1952. 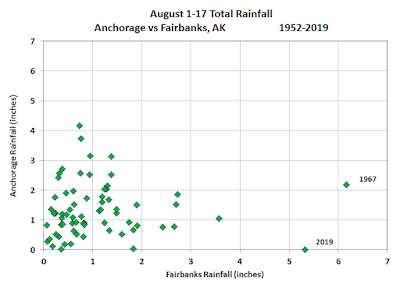 How can we explain the difference in rainfall fortunes over such a relatively short distance?  The map below shows the 500mb height anomaly (departure from normal) for the first 16 days of the month; the glaring feature is the high pressure anomaly just to the southwest of Anchorage, which has deflected the jet stream and associated weather systems farther north into western and central Alaska.

Below is the actual 500mb height map, instead of the departure from normal.  The ridge near southwest Alaska extends far to the south and southwest, and on the west side of the ridge a long fetch of southerly flow can be inferred, stretching from the central western Pacific up to the Bering Sea and then east into the interior.  This is the moist flow that has created the persistent rain in the interior.

Let's compare the recent pattern to what typically occurs when Fairbanks is considerably wetter than Anchorage in the first half of August; the map below shows the average 500mb height anomaly in 6 such years.  There are some distinct similarities to the height anomaly map above, but in the historical (and less extreme) events the unusual ridge was farther west along the Aleutians, rather than sitting in close proximity to Anchorage. 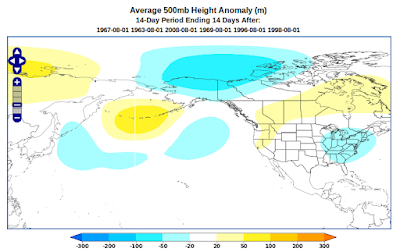 In the opposite scenario where Anchorage is notably wetter than Fairbanks at this time of year, it's not too surprising to see that there is a trough (lower heights) near Bristol Bay, rather than a ridge.  This pattern would allow a vigorous jet stream to affect south-central Alaska, but a downslope component to the flow over the Alaska Range would bring much drier weather to the interior. 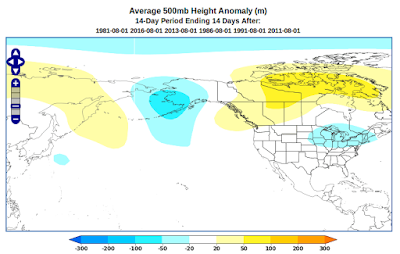