During the interior cold snap of the last week of 2019, when the temperature dropped well below -50°F in many places, I was eager to see what the new state-of-the-art ERA5 reanalysis would say about the minimum temperatures.  I've used the ERA5 data on previous occasions (e.g. see here), and will continue to do so, because it's an exciting new product from Europe's weather and forecasting science powerhouse, ECMWF.  Besides this, ERA5 is becoming widely used as essentially ground truth data across the globe, so it's of great interest to see how it performs in extreme or unusual weather situations.

First, here are some maps of the ERA5 daily minimum temperatures during the cold spell.  Note that I've used a 24-hour period from 3pm to 3pm AKST (midnight UTC) for simplicity in processing the data.  Click to enlarge. 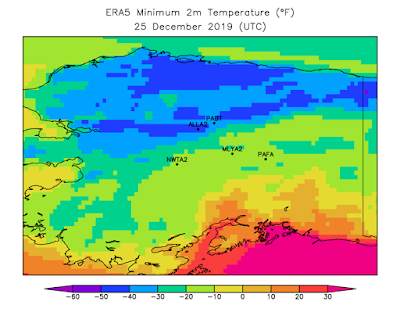 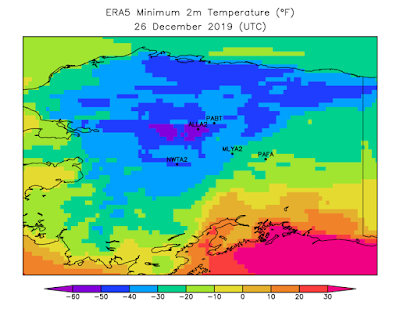 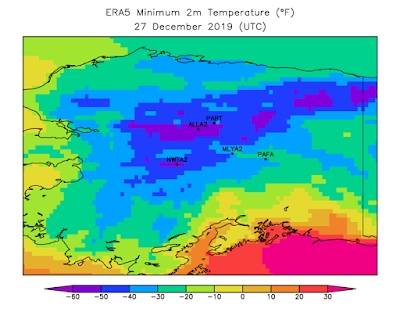 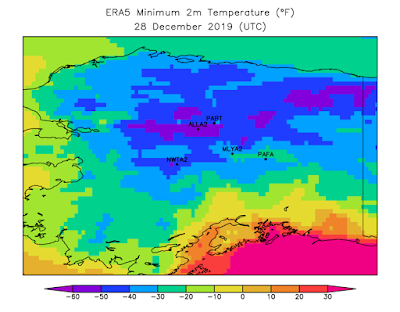 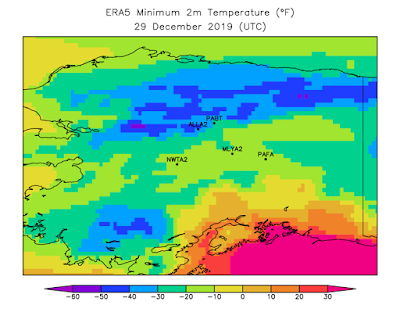 When comparing to the December 27 satellite-estimated values that I showed in a previous post, it's clear that the area affected by -50°F or lower is considerably smaller in the ERA5 data, especially to the south of the Yukon River. 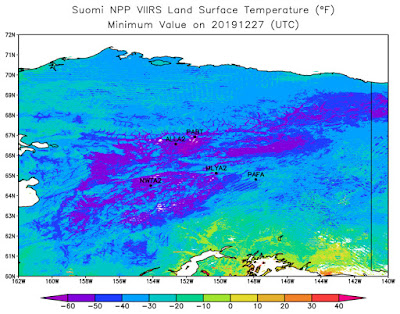 The absolute minimum on the ERA5 31-km grid is -58.7°F, and this is found right over Allakaket on December 27; this temperature matches very well at Allakaket itself, but as discussed before, the satellite suggests it was a bit colder on the Kanuti Flats.  Moreover, the ERA5 analysis is nowhere near as cold in the vicinity of the Eureka coop (MLYA2) report of -65°F, although of course we can't expect a 31-km resolution model to capture localized valley cold pools - we would need a far finer grid to hope for success in that situation.

It's interesting to see that the model does have a localized area of cold near the Nowitna CRN site (NWTA2), and so I thought it would be worthwhile to do a more detailed comparison of ERA5 vs CRN temperatures.  Of course the quality of the CRN measurements is extremely high.

First, the big picture: all daily mean temperatures since March 2017, when the Nowitna (Ruby 44 ESE) CRN site first started working reliably (after being installed in 2014).  See below - the comparison is fairly good at temperatures above freezing, but there are evidently some problems in the cold season; in particular, ERA5 tends to have a high bias in cold conditions, and it's large in some cases. 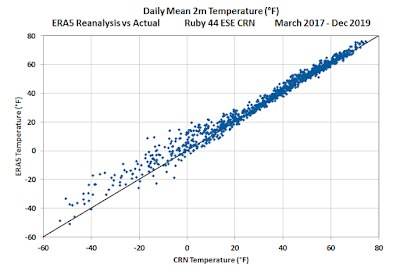 Here's a chart of daily mean temperatures this winter since October 1. 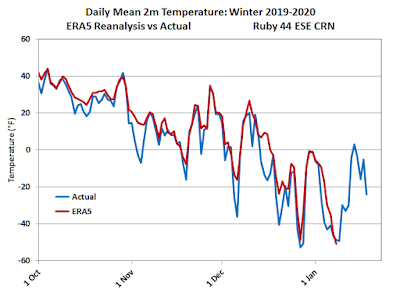 The main problem is immediately obvious: ERA5 stays much too warm when the temperature drops off quickly at the CRN site.  Each of these cold snaps no doubt corresponds to a period of clear and calm weather that allows a strong temperature inversion to develop, and evidently the model's boundary layer physics do not handle this situation well.  It's a bit disappointing, considering the pedigree of the ERA5/ECMWF models, but we must admit that it's a tall order to reliably represent such shallow layers of intense temperature inversion in any model. 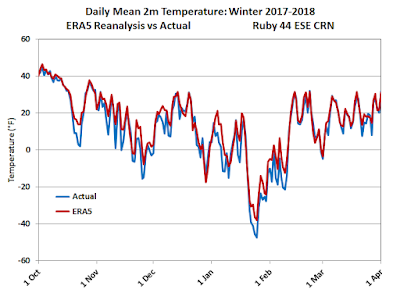 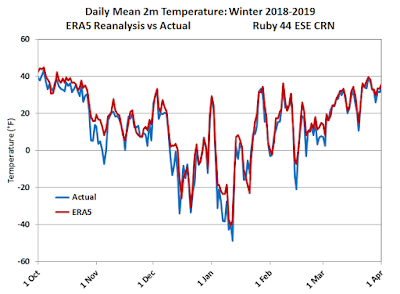 In summary, ERA5 clearly has some problems with extreme cold in Alaska in winter.  In the recent interior cold snap, the extent of coldest conditions was too small, although part of this is certainly related to the grid-box averaging that is intrinsic to the model; the model simply doesn't represent valley-floor locations when there is higher terrain elsewhere in the grid cell.  Looking at the Nowitna CRN, there's a clear tendency for a warm bias that shows up during cold spells, and this seems to be a symptom of inadequate surface layer physics as well as insufficient horizontal resolution.

All of this goes to show that we still can't overestimate the value of real ground-truth observations such as those provided by the wonderful CRN network.  And as an aside, I for one am very grateful for the efforts of the NWS personnel who finally got the Nowitna site working properly - it's a great location and we're lucky to have such a treasure trove of data.