Daily gains in daylight and solar strength are heralding the transition to late winter across Alaska, but temperatures plunged to their lowest levels of the season so far across parts of the interior and north today.  Umiat and Arctic Village reached -50°F on opposite sites of the Brooks Range, and a remarkable -55°F was reported by a co-operative observer far to the south, near Tanacross in the upper Tanana River valley.  Here's a look at minimum temperatures through 4pm (click to enlarge):

Wind chill has been nasty too; Fairbanks was reporting a steady breeze even as the temperature dropped into the -20s last night (bottoming out at -28°F).

Here's part of the cause of the cold outbreak: an intense high pressure system over the Arctic Ocean to the north of Alaska. 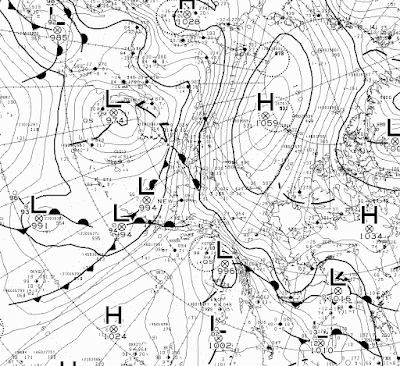 The estimated central MSLP of 1059 mb at 3pm yesterday is towards the upper end of the climatological history; for example, ERA5 data says that MSLP has reached 1060 mb at 80°N 180°W only once in the last 50 years (January 2013).  The anomaly is related to an unusual weather pattern across the mid-high latitudes of the Northern Hemisphere: the Arctic Oscillation is strongly negative, which means the usual circumpolar westerly flow is weak and disrupted in the upper atmosphere, allowing cold air to spill south from the Arctic to certain parts of the lower latitudes.

Here's a simple animation of a webcam view at Arctic Village today, showing thin layers of ice fog moving around, as is typical on very cold days.