Following up on my June 26 post about surprisingly low fire acreage so far this season, I took up reader Gary's suggestion to look at humidity data from Fairbanks.  The idea is that higher humidity this year may have produced "wet" thunderstorms that deliver significant rainfall, rather than "dry" thunderstorms that more efficiently spark fires.
But first, a correction: I realized the chart I showed last time was incorrect, because I had some missing dates; so it turns out that cumulative lightning activity statewide this year has actually been lower than normal.  It was only about 25% below normal on June 20, but since then there has been little lightning despite some notable warmth.  Here's the corrected chart - my apologies: 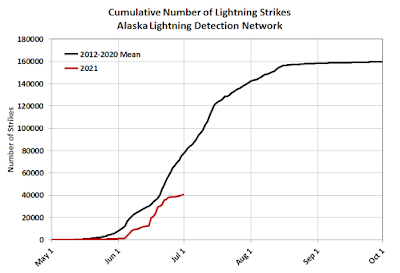 This greatly reduces the mystery of low fire acreage this year, but nevertheless it's interesting to see that humidity was indeed higher than normal in June when we look above the surface to the 700mb pressure level (about 10,000') in the Fairbanks sounding data.  In the following chart, the red and purple lines show the 700mb relative humidity and dewpoint respectively, and both were well above normal in June.  Higher humidity aloft helps thunderstorms gain strength and produce more rainfall, because it reduces the "entrainment" of dry air that tends to mix away the moist updrafts. 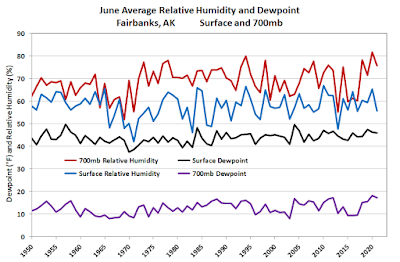 Surface-level humidity, on the other hand, was somewhat below normal in comparison to recent decades.  Interestingly, there's little historical relationship between June fire acreage and humidity at the surface, perhaps because dry conditions mean fewer thunderstorms and fewer fire starts.  However, June fire acreage is clearly related to 700mb humidity; compare the two charts below. 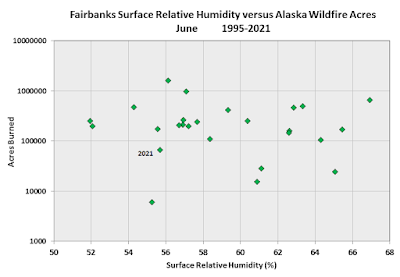 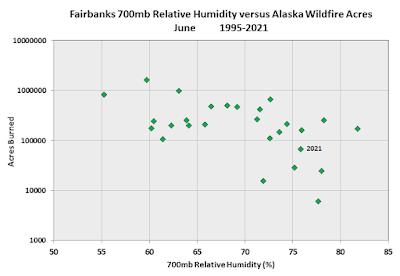 In conclusion, low lightning activity is clearly a major reason for the low fire acreage so far this year (still well under 100,000 acres statewide), but above-normal humidity in the middle atmosphere may also have played a role by enhancing rainfall and minimizing so-called dry lightning.
Posted by Richard James at 4:36 AM