A couple of items of follow-up today.  First, all semblance of similarity to the early cold of 1992 has long since been lost this autumn in Fairbanks, with above-normal temperatures persisting now for more than two weeks, and a near-record high of 48°F yesterday.  It was the highest temperature for more than a month, which in itself is quite remarkable at this time of year, when the seasonal normal is dropping so quickly.  There's been no meaningful drop in this year's daily mean temperatures since late September. 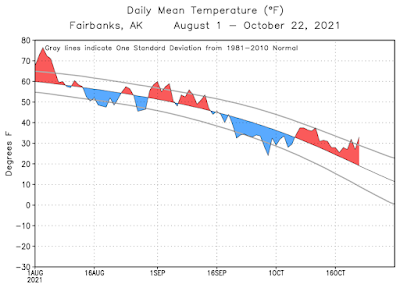 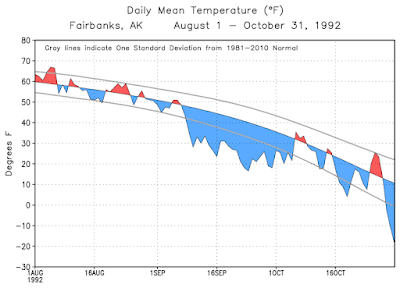 The warmth has pushed back freeze-up of rivers; the Tanana is mostly ice-free at Nenana, as is the Yukon River across the border at Dawson, and the Salcha shows plenty of open water (photo below from Thursday, courtesy of Twitter user NateoftheNorth). 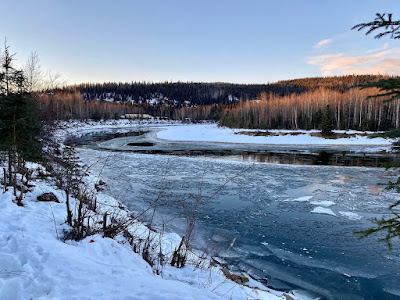 Second topic: following up on my post last week on a very different facet of the cryosphere - Arctic sea ice - I proceeded to examine both the opening and closing dates of the Northeast Passage in the past two decades, and the chart below is the result of this effort.  This is based on the NSIDC sea ice index images, which show the estimated daily location of ice concentration above 15%. 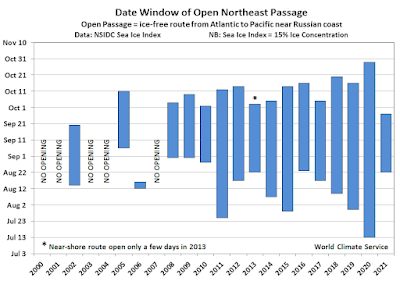 The note for 2013 highlights the fact that there was well over a month of open passage to the north of Severnaya Zemlya, but the near-shore route adjacent to the mainland (Taymyr Peninsula) was closed for nearly the entire season.  The more northerly route is pretty far north (north of 80°N) and I'm unsure if this would be considered an open Northeast Passage, but I allowed it for the chart.
Besides the striking trend towards a more navigable route, it's interesting to see the difference between this year and last.  This is largely the result of contrasting weather patterns, with 2020 having exceptionally warm conditions across the Arctic Ocean, but summer 2021 being relatively (but not extremely) cool and cloudy.  Obviously the window for open navigation is sensitive to the details of where the ice is located, with Severnaya Zemlya being - as this year - the most common bottleneck; Arctic-wide sea ice was not that much higher this summer than in recent years.
Posted by Richard James at 12:22 PM