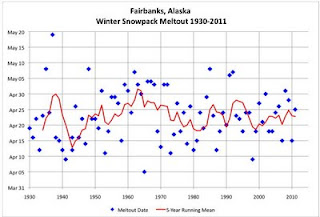 Snow depth at the Fairbanks Airport was down to 4 inches as of 4am Sunday morning. With a high temperature again near 60 today, either April 24th or 25th will be the last day with measurable snow cover. At the left is a plot of meltout dates for Fairbanks since 1930. I have adjusted for leap years in this plot. The red line is the five year running mean. Several things stand out here. First, over the full 82 years of data there is no trend. There is a cluster of early dates centered around 1940 and a cluster of late dates centered in the early 1960s. Claims of a trend toward earlier snowmelt based on the Fairbanks data are an artifact of starting the regression later than 1945 or so. Second, since the mid 1970s there is not much of a trend at all, though the lack of very late dates in the past 20 years is becoming noticeable.
Posted by Rick at 8:04 AM