According to the analysis of Arctic Sea Ice coverage by the National Snow and Ice Data Center, ice coverage for July was the lowest of record, even lower than 2007. However, during the last couple weeks of July the rate of ice loss decreased, and as of August 3rd the total coverage is no longer lower than the same date in 2007. This is potentially good news, but the slower loss may not last. Figure 4 of the analysis, below, shows that there is a lot of first year ice that is still vulnerable to loss in the six or seven weeks that remain of the ice loss season. 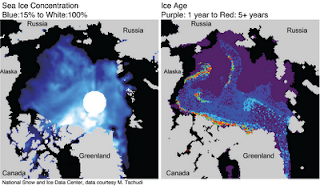