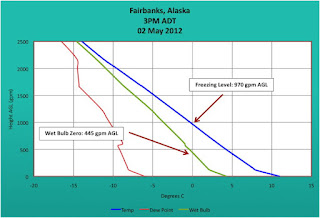 Friday afternoon and evening brought convective showers to Fairbanks-land. However, with a dry and still cool-ish airmass in place, the form of the (light) precipitation that did occur was perhaps not as might be expected. There were a few reports of light rain in the Fairbanks bowl. However, snow was reported near the Chatanika River on the Elliott Highway, below 800 feet elevation. Here on Keystone ridge, it snowed between 330pm and 4pm, with temperatures no lower than 38F. Unsurprisingly, light snow was also reported on Wickersham Dome, elevation 2600 feet.

The graphic shows a plot of the 00Z May 05 Fairbanks upper sounding (heights are in geopotential meters: for practical purposes, just think of the y-axis as in meters). The freezing level was over 3000 feet above the ground. However, the elevation of the "wet-bulb zero" (the elevation that if you saturate the air the temperature would be at freezing) was only 1400 feet above the ground. In at least some of the precipitation shafts, the air was not saturated, allowing snow to fall perhaps as much as 2500 feet below the nominal freezing level.
Posted by Rick at 11:26 AM