Here's an update on Fairbanks temperatures thus far this winter. Reader Gary asked for a plot showing relative magnitude of the daily departures, and after some fiddling around with Excel I came up with this plot: 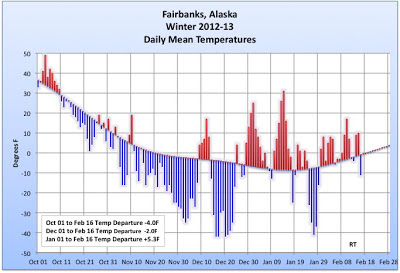 The daily mean temperatures are the values at the end of the bars, with above and below normal values colored accordingly. Just eyeballing this you can see that early winter was consistently chilly, while since the last days of December it has been mostly mild except for the few days of deep cold late in January. The actual means are: