The heat is on in the interior, with the temperature reaching 76 °F in Fairbanks and Nenana yesterday, and 77 °F in Northway.  It probably won't be many days before 80 °F is reached in Fairbanks, as forecasts show the strong ridge over northwestern Canada persisting and perhaps intensifying next week.

Bettles recorded a daily minimum temperature of 53 °F on Thursday, which is the warmest low temperature for this early in the season except for the extreme early heat wave of May 1995.  The 1995 heat wave brought a high temperature of 81 °F to Bettles on May 11 (the earliest 80+ reading by nearly two weeks), and raised the mercury to a remarkable 88 °F in Fairbanks on the same day (the earliest 85+ reading by 13 days).  Without a doubt, the 1995 event is the gold standard for early extreme heat in Fairbanks; a few other years have reached 80 °F by mid-May, but never much above that level.

I thought it would be interesting to view a graphical representation of the earliest and latest extremes of temperature in Fairbanks - see the chart below.  The left side of the chart shows the extremes for earliest warmth (high Tmax, high Tmin) or latest cold (low Tmax, low Tmin) from January 1 through June 30; so for example, the 88 °F on May 11 shows up as a jump in the "highest Tmax" line.  It's interesting that the cold extremes also show a jump at about the same time - that would be the extreme cold of May 8-9, 1964.  The right side of the chart shows the earliest cold and latest warm extremes, from July 1 through December 31. 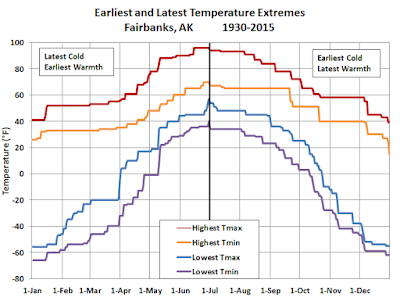 The chart is quite a handy tool for seeing the periods of the year during which any particular extreme has been observed, for example 80 °F has never been observed earlier than May 9 or later than September 5.  It's interesting to see how late in the year minimum temperatures above 60 °F have been observed; but this is due to one event, the great chinook of late September 1995.  (As an aside, I'm intrigued by a possible connection between May and September weather - early and late extreme warmth in 1995, late and early extreme snowfall in 1992... food for thought!)

Here are corresponding charts for Bettles, McGrath, and Northway. 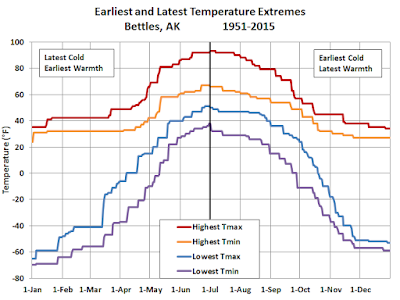 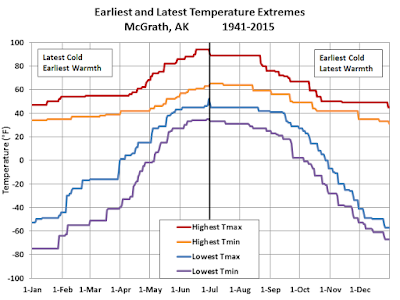 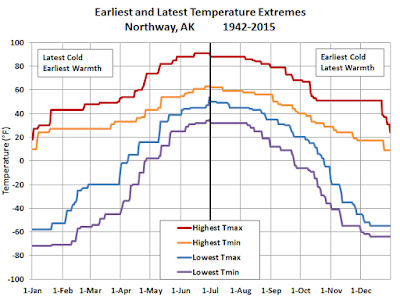 Posted by Richard James at 5:48 AM