Sunday's weather in Fairbanks was unusually chilly, and not just in comparison to hot conditions earlier this summer.  The high temperature of 55°F was the lowest high temperature in the month of July since July 31, 2008.  It wasn't quite a record, though: July 19, 1965 saw a high of 54°F.  The July record for daytime coolness is 48°F in 1934 and 2003.

Thick cloud and light rain were of course the direct cause of the temperature suppression yesterday.  The 500 mb height analysis from 4pm AKDT (below) reveals a trough along the 140th meridian and a weak ridge over southwest Alaska.  In the northwesterly flow between the two features, some subtle vorticity (cyclonic flow) features and warm advection appear to have caused the rain and cloud cover. 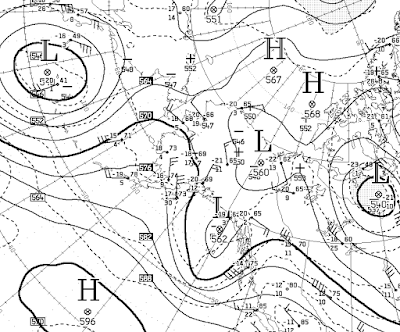 Here are the 500mb and 850 mb vorticity maps from 10am yesterday; yellow and orange shading shows enhanced vorticity, which when transported across a region typically brings cloud and precipitation. 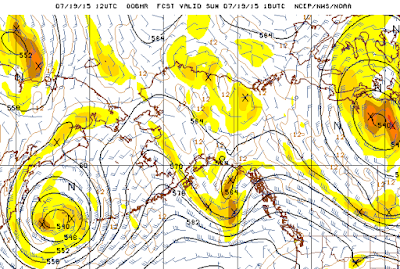 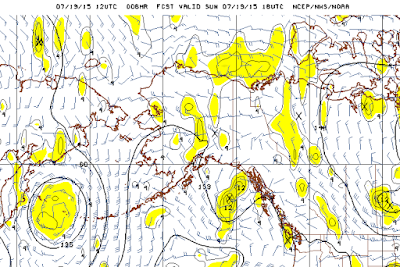 The diurnal temperature range yesterday was only 3°F (high of 55, low of 52), which is only the second time in Fairbanks' history that the temperature has remained so steady for an entire day in July.  The previous occasion was July 11, 1990, when 1.24" of rain fell.

It is rare for the temperature to remain so steady in the height of summer, because the long daylight hours and large solar radiation nearly always allow the temperature to jump up by at least a few more degrees.  So it's even more remarkable that yesterday's small diurnal range occurred in conjunction with only 0.08" of rain.  This has actually never happened before from May through August; the previous smallest amount of rain associated with such a small diurnal range in these months was 0.23" on August 21, 1978.  So in this sense yesterday was a record-breaking day.
Posted by Richard James at 5:33 AM