Residents of the eastern interior suffered through a sweltering summer day yesterday - quite possibly the hottest of the summer.  The temperature reached a high of 89 °F at Fairbanks and 87 °F at both Eagle and Bettles.  In Fairbanks and Bettles, temperatures this high occur in slightly more than 1 in 3 years over the long run.

Reader Gary noted that the temperature in Fairbanks remained high late into the evening yesterday and suggested that this duration of warmth seemed exceedingly unusual.  It's interesting to consider what the historical data reveal about comparable past events.  First, we can note that the temperature at midnight (standard time) was 77 °F, which is indeed very unusual.  Here are the highest temperatures reported in the hourly observations for midnight AKST:

So last night's warm midnight temperature ties for 4th highest in the historical data since 1950.

As for the duration of excessive warmth, yesterday produced 8 consecutive hourly observations at or above 85 °F at the airport, from 1pm to 8pm AKST inclusive.  Looking at past events, this is again close to but not quite a record.  Since 1950, Fairbanks has recorded 4 events with 9 consecutive hours of 85+ °F, 3 events with 10 hours, and 1 event with 11 hours.  Here are the top durations of 85+ heat:

Note that the 1969 event may have been an hour longer in reality because observations were only taken once every 3 hours at that time, and the noon observation was already 88 °F.

Here's a chart showing the number of times that multi-hour periods have exceeded certain durations with the temperature at or above 85 °F. 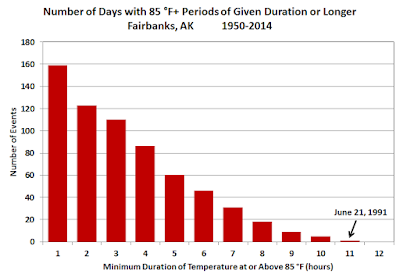 This gives some additional context for yesterday's hot spell and shows that while very unusual, the airport observations (8 hours at 85+) do not indicate that the heat itself was historic.  However, this doesn't exclude the possibility that the heat was slightly more intense or long-lived in other parts of Fairbanks-land, or that it produced a more oppressive sensation due to other factors.  One possibility is that the dewpoint may have been very high in parts of town; it rose to 60 °F at the airport at 10pm, which is certainly very unusual - I can find only one historical instance of comparable temperature and higher dewpoint at that time in the evening (August 5, 1994).

For additional background, the chart below shows the annual number of hours with a temperature of 85 °F or above in Fairbanks.  Note that from 1965-1972 the observations were taken once every 3 hours rather than every hour, but I've accounted for that difference in the calculation. 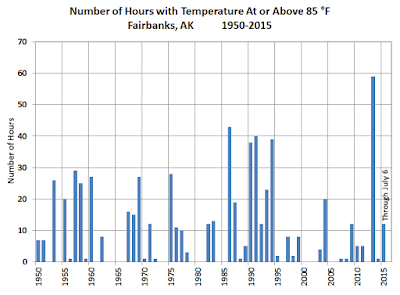 It's interesting to note that except for the major outlier in 2013, the number of hot hours has been relatively low since 1995.  It will certainly be interesting to see how the remainder of this summer turns out.

Further documentation of yesterday's event can be found below: 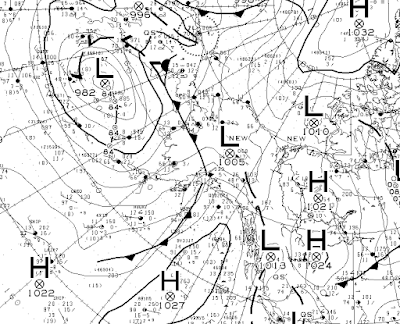 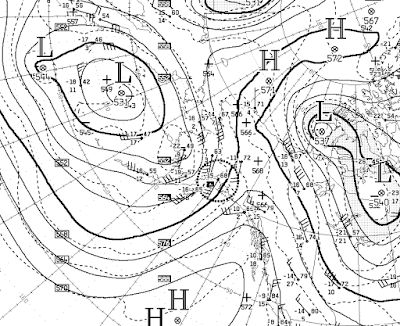 A surface observation map showing the evening heat in the eastern interior (note also an extraordinary 77 °F at Wainwright on the Arctic coast): 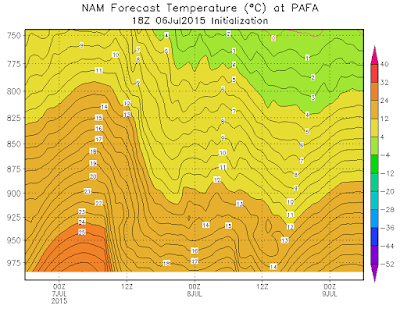