I've been rather too busy to focus on new blog material lately, but after posting about O'Brien Creek a couple of weeks ago, I started thinking about another wintertime cold spot that Rick mentioned some time ago.  I can't find his comment now, but I clearly recall him stating that Allakaket is "much colder" than Bettles in winter; so I figured it would be worth posting another set of comparison plots.  The two villages are about 40 miles apart on the Koyukuk River, with an elevation difference of 240 feet (Bettles being higher).

Allakaket was an active climate reporting station in the early 20th century and historical data exists with varying degrees of completeness up until 1982; but sadly there's nothing in the GHCN database since then.  Bettles started reporting in 1951, so in theory we have 30 years of overlap between the two sites, although Allakaket has many periods of missing data.  Using only the days with both maximum and minimum temperature reported at both sites, I calculated the monthly mean temperatures for the period of overlap, and the results show that Allakaket was indeed much colder - see the chart below. 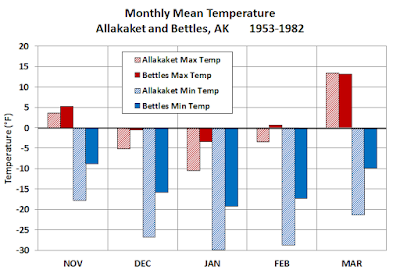 It's remarkable to see that average daily minimum temperatures were more than 10°F colder at Allakaket from December through March, and daily maximum temperatures were 7°F colder in January.  The average January minimum of -29.7°F at Allakaket is lower than the modern average at either Chicken or O'Brien Creek, although here we are looking at the colder climate of several decades ago.

Looking at all winters with at least 90% complete and overlapping data, we can see that Allakaket was colder than Bettles every time, for both maximum and minimum temperature.  In the winter of 1976-77, Allakaket's low temperatures were 16°F colder on average. 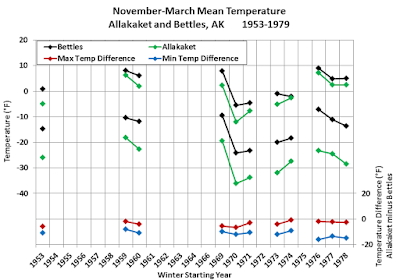 The absolute maximum and minimum temperatures for each date during winter within the overlapping period show a pronounced difference in the potential for extreme cold (see below); but the warm extremes are about the same, showing that Allakaket is just as capable of warming up when temperatures get far above normal. 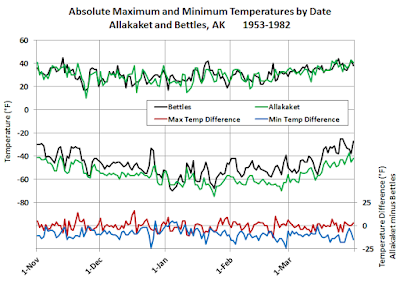 Finally, scatterplots of the 3100 overlapping days show the joint distribution for daily maximum and minimum temperatures.  Notice the much higher number of days that dropped below -60°F in Allakaket compared to Bettles.  It's too bad that there is no weather observer in Allakaket these days, because it would be fascinating to see if these differences persist in the modern day, or if they were partly an artifact of a colder climate in earlier decades, with perhaps more clear skies and calm winds to help reinforce inversion conditions lower down the Koyukuk River valley. 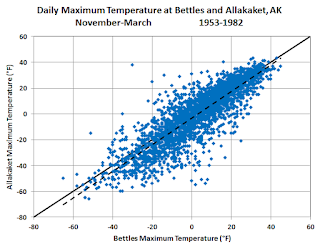 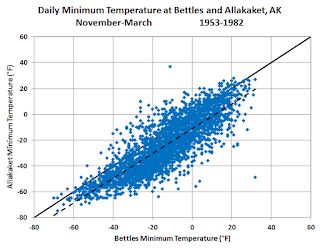