In last week's discussion of Brooks Range wind chill, I mentioned the fact that temperature tends to decrease as wind speed increases at Howard Pass.  An inverse relationship between wind speed and temperature is very different from what most Alaska residents experience - in most locations it's coldest when the wind is calm - so I thought it would be worth taking a closer look at the Howard Pass data.  I obtained the hourly observations (2012-present) and looked at the data from several angles.

First, the distribution of wind speed in December through February (see below) does not show anything too unusual, although it's obviously a windy place; the wind speed exceeds 40 mph about 15% of the time in winter.  And as we know, very high wind speeds sometimes occur.  Last Saturday's sustained wind speed of 98 mph (during the 7-8 pm hour) was the highest on record for the station; this measurement probably wouldn't have been possible without the new robust anemometer that was installed last summer. 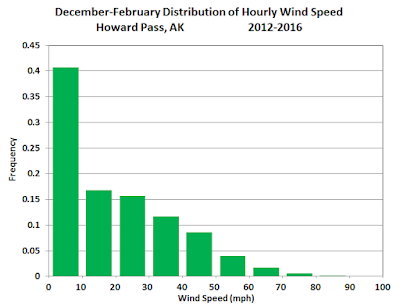 The distribution of hourly temperature measurements is more unusual, showing a double peak, with the temperature most often falling between -10 and -20°F. 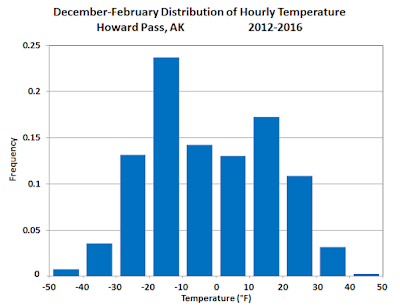 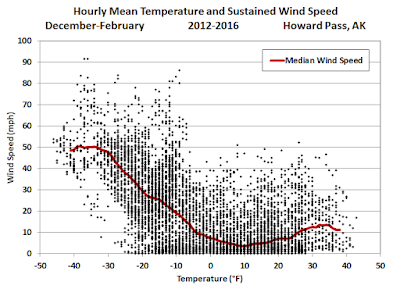 Looking at hourly wind chill values, the distribution shows a pronounced double peak, and the most common wind chill is between -40 and -50°F.  This is quite remarkable for a location at only 2062' elevation (although it is above the Arctic Circle).  Bear in mind that wind chill is undefined for wind speeds less than 3mph, so quite a number of calm-wind observations are excluded from the distribution. 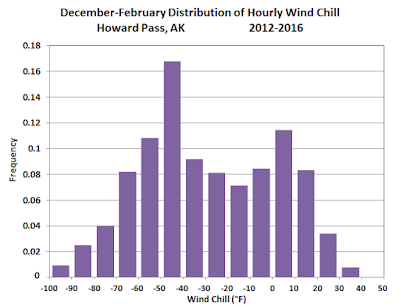 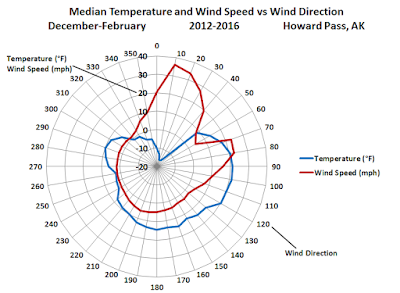 Here are two images showing the location of the Howard Pass RAWS relative to the surrounding topography (click to enlarge); in the first image, the Howard Pass site is the one with the red "20" next to it, at the northeast edge of the Noatak River basin. 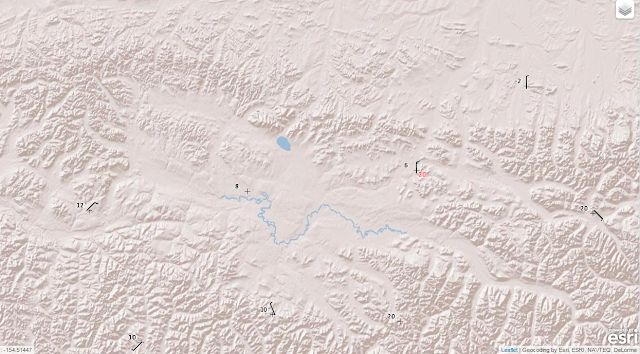 It would be very interesting to look at the other RAWS sites scattered around the western Brooks Range, to see if any others show the same kind of behavior.  I plan on doing this when I have time to obtain and parse all the hourly data.  For now, I just looked at the data from Anaktuvuk Pass - see below.  Surprisingly, Anaktuvuk Pass appears to be remarkably non-windy in winter; the absence of strong winds in this data almost looks unrealistic, although a topographic map reveals that the site is actually very sheltered from most directions.  There is a slight increase of wind speed with warmer temperatures and there's no evidence of the cold northerly gales that are observed at Howard Pass. 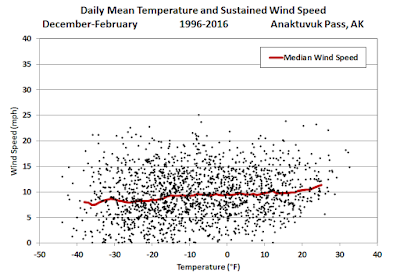 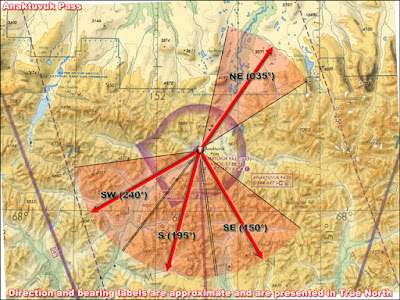 For comparison, the Umiat RAWS on the North Slope shows behavior that is more typical of low-elevation Alaska in winter; wind speeds are typically light, and higher wind speeds are associated with relatively warm temperatures. 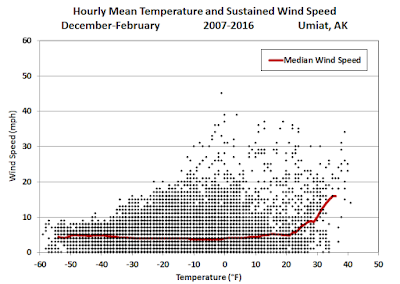 Posted by Richard James at 9:10 AM