The month of June was very wet in Fairbanks, with 3.29" of rain, the 4th highest total on record (1930-present).  The monthly mean temperature was slightly below the 1981-2010 normal for the first time since last September.

Interestingly, however, the month was not more cloudy than usual in the Fairbanks area - in fact the mean cloud cover at the airport was lower than any other recent year except 2013 (when June was very hot and sunny).  The CRN site located 11 miles NE of town recorded 18.6 MJ/m2 of solar radiation, which is slightly below the 2003-2015 average of 19.3 (standard deviation=2.1), so at that site it was somewhat cloudier.  The high rainfall total combined with only modest cloud cover is consistent with the rainfall being unusually convective; thunder was observed on 12 days, which is the highest number of days in June since 2010.

Compare this pattern to what happened two years ago, when June was the wettest on record.  In that month cloud cover was far above normal and thunder was observed on only 2 days.  The maps below show the 500mb height anomalies in the two months.  Back in 2014 there was a low pressure anomaly over the state, but this year there was a ridge to the southwest and a trough over the Arctic Ocean.  Not all wet Junes are created equal in Fairbanks. 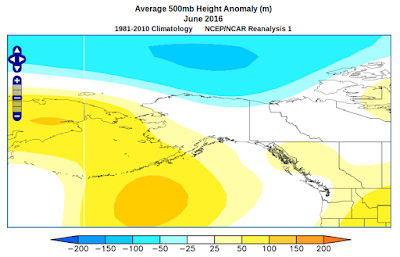 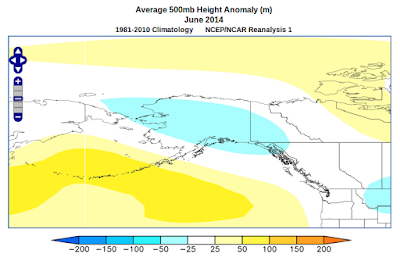 The maps below show the anomalies for June at 16 stations across the state.  Except for Annette Island last month, the below-normal temperatures at Fairbanks and Bettles are the first cool anomalies to show up at any of these stations since December. 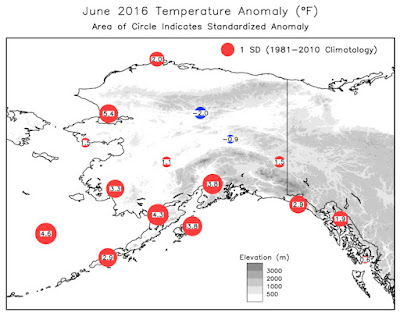 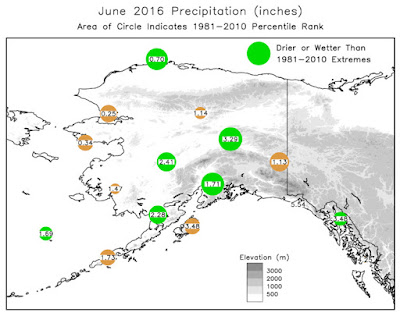 Posted by Richard James at 7:47 AM