More Rain On The Way

Following swiftly on the heels of last week's hot spell, wet weather returned to Fairbanks earlier this week, with well over 24 hours of continuous rainfall on Sunday and Monday; and more rain is on the way.  The total rainfall since June 1 is up to 5.51", which is well over twice the normal amount and is the 4th highest on record for the summer to-date.  The number of days with at least 0.25" of rain this summer is tied with 2014 for first place (9 days), and the same is true for number of days with 0.1" of rain or more (14 days, tied with 1949).

The two charts below are updated versions of the charts I showed a month ago.  While this summer is not as wet as the record deluge in 2014, it's still very unusual. 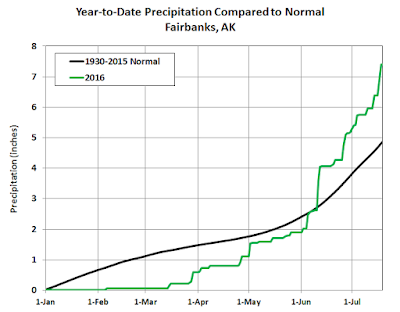 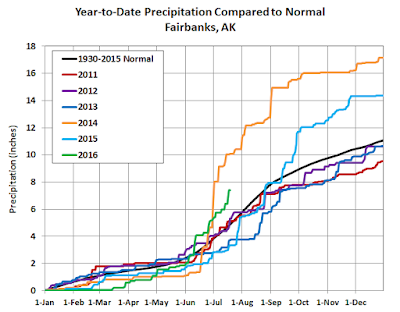 An update of the 500mb height anomaly map in the earlier post shows that the last month has brought a rather similar pattern to that of early June: low pressure over the Arctic and high pressure from the Bering Sea to south of the Alaska Peninsula.  Broadly speaking, this translates into enhanced westerly flow compared to normal and - importantly - reduced dry southerly flow.

Here's this morning's GFS model forecast for rainfall in the next 7 days in Fairbanks.  It sure looks a lot more like August than July; but it's good news for the fire situation. 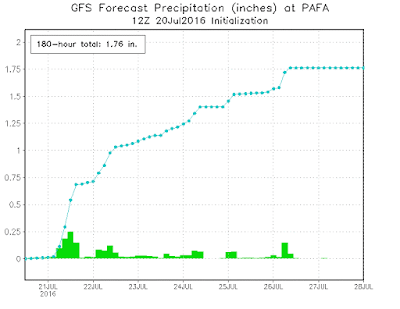 Posted by Richard James at 6:22 PM