Snow Cover - Will It Last

A fair portion of the interior now has at least a little snow on the ground after yesterday's modest snowfall.  Half an inch of accumulation was reported at Fairbanks airport, but the snow depth was rounded up to 1".  It's little more than a dusting of snow, so what are the odds that it will last and prove to be the start of the winter snow pack?

An analysis from a couple of years ago (see here) indicates that we're now late enough in October that there is less than a 20% chance that a one-inch snow cover will melt out to a trace or less.  This suggests that this year is likely to be one of the 10% or so in which the first measurable snowfall doesn't melt out.  On the other hand, the forecast for next week looks warm, with major storminess in the Bering Sea importing warm air over interior Alaska.  About half of all years reach 40°F or warmer after October 25 in Fairbanks, so if it doesn't snow any more - which looks likely in the short-term - then I'd say there's a fair chance of seeing bare ground again.

The chart below shows the number of days with zero or trace snow cover occurring after the first measurable snowfall, versus the date of the first snowfall on the horizontal axis.  Obviously the earlier the first snow occurs, the more subsequent snow-free days there tend to be before winter sets in.  But it's interesting to see that very late first snows do tend to melt out - which makes sense if the weather pattern is unusually warm in those years. 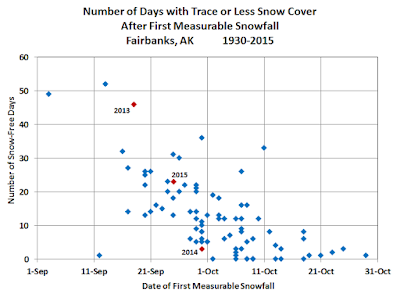 The outlier on the lower left is from the infamous early winter onset of 1992 - the only time the winter snow pack was established in September, and mid-September at that.