Not So Cold in Barrow

The sun is now remaining above the horizon for 24 hours a day on the Arctic coast of Alaska, but temperatures are only just getting up to about the freezing point.  Barrow (or Utqiaġvik) has not yet exceeded 32°F this spring, although it was 36°F back on January 1st!  The normal date to break the freezing mark for the first time in Barrow is May 9th; temperatures have been less variable than usual of late. 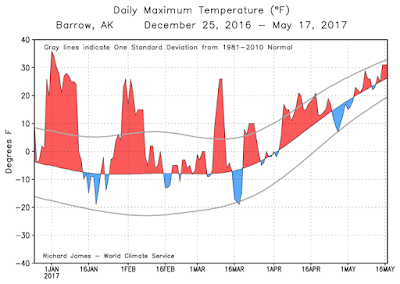 Looking back at the 2016-2017 winter, it's remarkable to note that Barrow failed to reach -40° for the 5th consecutive winter; the lowest temperature observed all winter was -36°F, which is exactly the same as the last two winters.  The two winters before that only saw -39° and -38°.  The persistent absence of deep cold is quite remarkable.  In terms of daily maximum temperatures, not a single calendar day remained at or below -20°F in the past winter, and it's the first time that has happened in the modern history of daily observations from Barrow. 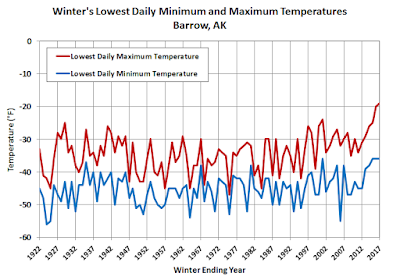 On another note, here's an interesting chart showing the date of the first spring day with a temperature of 40°F or higher in Barrow.  The absence of variability in the 1950s and 1960s is rather striking, and the two outlying early occurences in 1931 and 1936 really stand out.  There seems to be no particular reason to doubt that it really did get that warm in late April in those years; it was very warm in Kotzebue too.  The scanned observer forms are below (click to enlarge; note "rain" on April 23, 1931). 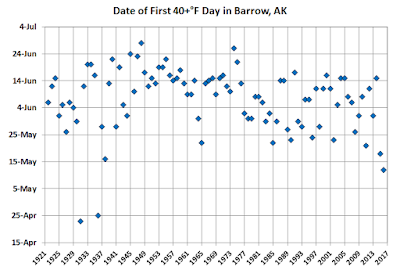 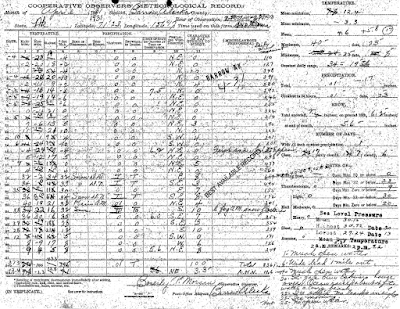 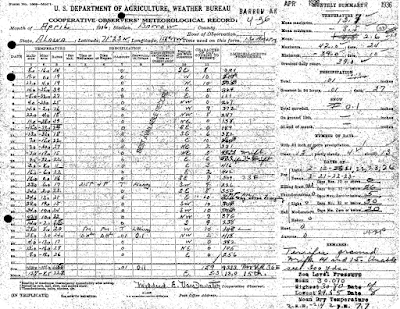