An article today in the Washington Post brought attention to a somewhat unsettling trend in NOAA's upper-air observing program at sites in Alaska.  In short, there has been a reduction in the number of balloon soundings being launched from several of Alaska's upper-air observing sites, and it is likely that this will have some (unquantified) negative effects on the quality of weather forecasts, especially for downstream locations.

The chart below verifies the issue, as the percentage of missing soundings from Alaska's 13 sounding sites has increased rather substantially since late summer. 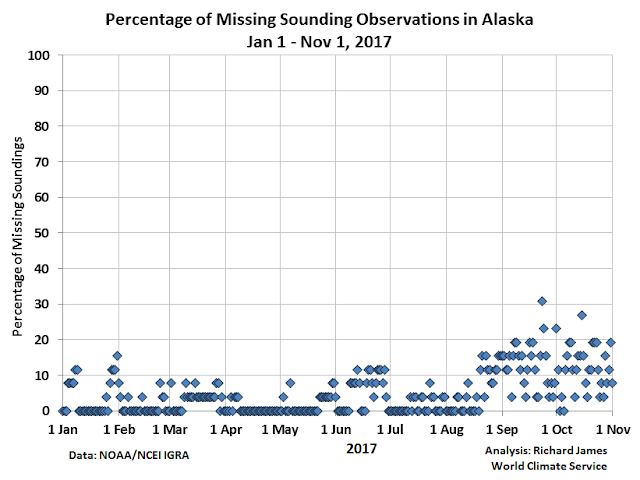 Looking back at 2016 (see below), over 90% of days had all, or all but one, of the usual 26 soundings per day across the state, although there seems to have been something of an increase in missing data in the second half of the year.  Presumably the problem has been developing slowly over time, but for reasons cited in the article it has worsened considerably of late. 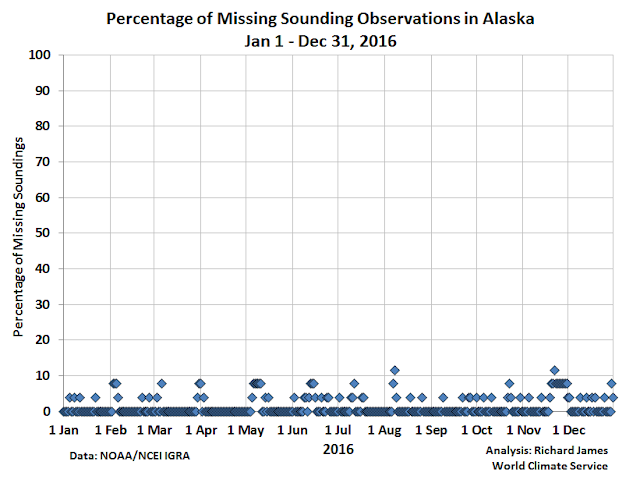 My perspective on the issue is that it's fairly inexcusable, even if the argument can be made that the coverage of 13 upper-air sites over Alaska is quite good compared to other high-latitude parts of the world.  Given the economic importance of forecasts for the lower 48 and Canada, high-density sampling of the atmosphere upstream over Alaska is really critical, and balloon soundings have tremendous value for numerical weather prediction.  Surprisingly, two of the sites that have been cut back are Utqiaġvik/Barrow and Kotzebue, and these are the only U.S. upper-air sites in the Arctic.

I would argue that just purely on a financial basis, it makes sense to at least maintain the existing sounding network.  Compared to the cost of satellite observing platforms, the value of the forecasts, and the cost of the computers to crunch all the numbers, the radiosonde network provides enormous value for money.