After a winter of record-breaking warmth in Alaska's northernmost city, temperatures have returned to near-normal levels recently, and even a bit below in the past week or so, as easterly flow has kept a chilly Arctic air mass in place. 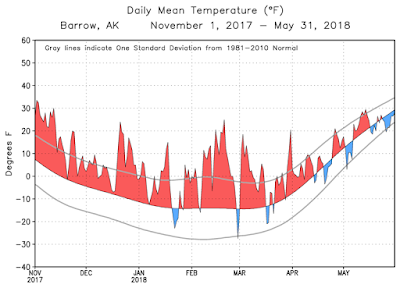 The slight preference for cool conditions lately has prevented Utqiaġvik (Barrow) from seeing a sustained thaw so far this season; there has not yet been a day with mean temperature above freezing this year.  It has been a few years since the first such day occurred as late as June, but we would have to go another 10 days or so for the absence of warmth to become really unusual.  The chart below shows the long-term trend towards earlier first thaw day, and earlier first 50°F; both dates have advanced by more than a day per decade over the long-term history at Utqiaġvik. 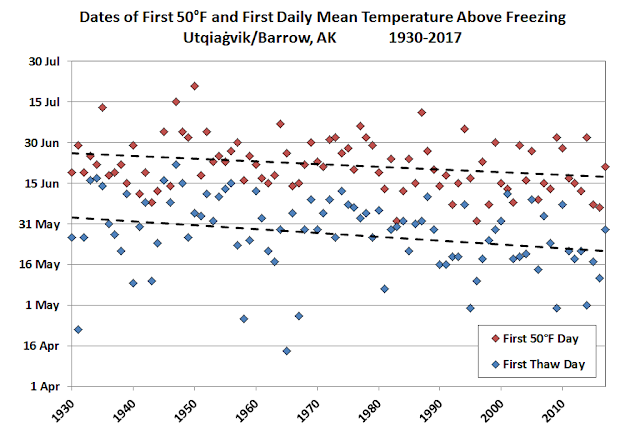 The relative magnitude and persistence of the recent warming trend at different times of year is illustrated by the chart below.  For each month in the past 15 years, I've plotted up the monthly mean temperature as a departure from the 1971-2000 normal, and the red markers highlight the anomalies since 2013.  As we all know, warming has been most amplified in autumn as a direct result of sea ice loss.  The absolute magnitude of change has been smaller in summer, as Arctic summer temperatures are rather strongly constrained by the presence of at least some sea ice; but the summer warming is nevertheless very significant as the variance is much smaller in the warm season. 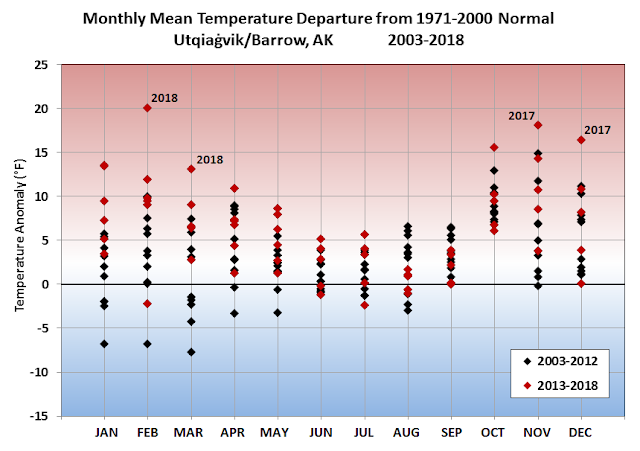 The year labels at the top of the columns indicate months in which the monthly-mean temperature records were broken in the past winter.  Remarkably, from November-March, 4 of 5 months saw monthly mean temperatures higher than any observed before.

Just to drive home the magnitude of what happened in the winter that recently ended, the chart below shows the November-March mean temperature for each winter since 1930-31; and the high-quality CRN data are fully consistent with the airport temperatures over the past 16 years.  A linear trend obviously doesn't capture what is happening here. 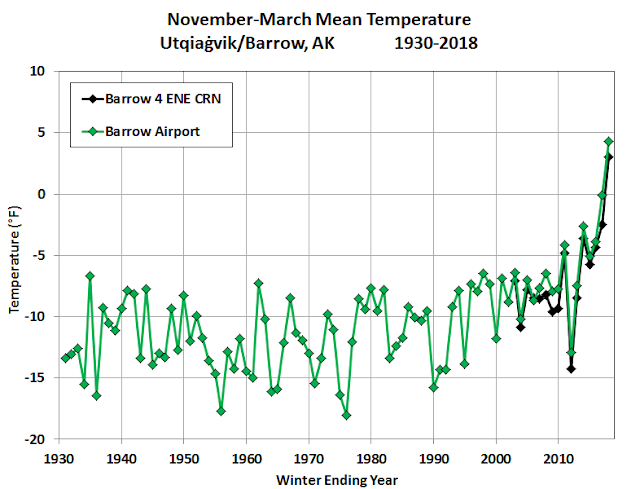