A few weeks ago I alluded to the fact that the temperature increase of recent decades has been smaller in summer than at other times of year in northern Alaska; but when we consider that temperature variability is lowest during summer, the warming is still very significant at that season.  It's worth illustrating this in a bit more detail.

First, the chart below shows the simple temperature difference between the 1971-2000 and 2001-2017 periods for 12 overlapping 3-month seasons throughout the year, for Utqiaġvik (Barrow) as well as Kotzebue, Nome, and Fairbanks.  The temperature difference peaks in late autumn (October-December) for all 4 sites, and the amount of warming that has occurred in summer is ostensibly quite small in comparison. 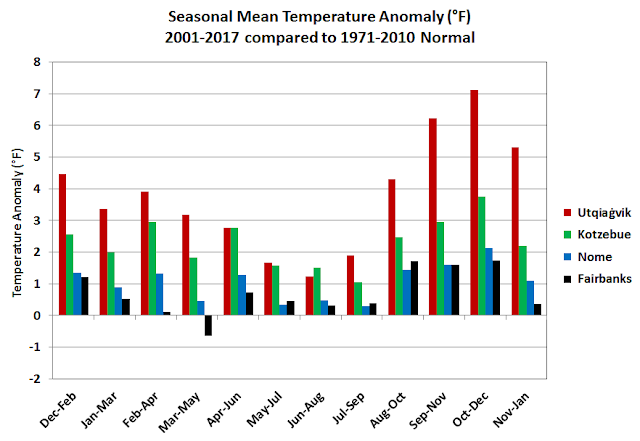 However, when we normalize the temperature difference by the interannual standard deviation of the seasonal temperatures (during 1971-2000), the picture changes - see below.  Autumn is still the time of peak warming, but the summer warming no longer appears insignificant.  Interestingly, the summer temperature change at Kotzebue has been larger in standardized terms than the winter and spring warming; but at Utqiaġvik the summer trend remains less pronounced than at other times of year. 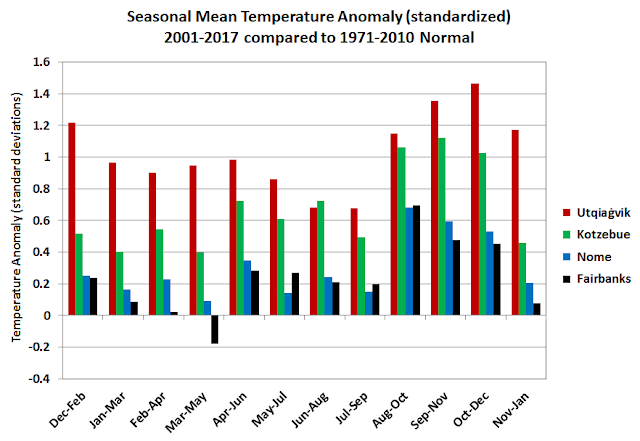 None of this is a big surprise, but I think it provides a bit of useful perspective on the significance of relatively "small" summer warming trends in the Arctic.