Freeze-up is now under way across portions of the Arctic Ocean, notably in the eastern Beaufort Sea, the Canadian high Arctic, and the Greenland Sea.  According to NSIDC's daily sea ice index, total Arctic sea ice extent has already increased about 12% from its seasonal minimum on September 16th.

Let's take a look at how this year's September sea ice extent compared to earlier years; we now have 40 years of consistent sea ice data from satellite microwave observations (not visible or infrared wavelengths - thus not obscured by cloud).  See the chart below, and click to enlarge. 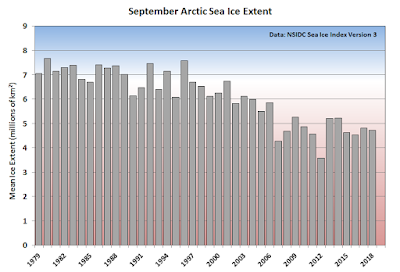 This year's Arctic ice extent was right in line with September's data from recent years, which is good news from one perspective, as we are not seeing (at least not yet) the kind of rapid downward acceleration in sea ice loss that was perhaps feared a few years ago.  However, the loss of ice in just the last 20 years has been dramatic and unquestionably very rapid from the perspective of longer term climate.

With 40 years of data now in front of us, I think it's safe to say that the multi-decadal ice loss has been far from linear; the chart above shows rather little change in the first 20 years, with some high ice years mixed in until 1996.  If we look at ice area rather than ice extent - see below - we also find that the highest values occurred in the last 15 years of the 20th century.  (See here for an explanation of the difference between extent and area.) 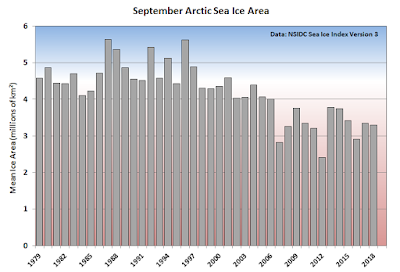 In both charts the really rapid loss occurred from about 1998 through 2012, and there appears to have been a lessening of the trend in the most recent years.  Of course it's too early to assign much confidence to potential changes in trend over such short periods, but nevertheless it is interesting to note that there is no statistical significance to the most recent trend in ice extent for anything less than a 15-year period.  In other words the 2005-2018 downward trend, and any shorter trend ending in 2018, is not statistically significant; and I take this to be a hint of good news for Arctic sea ice prospects in coming years.

Finally, the estimated September Arctic sea ice volume from the University of Washington's PIOMAS model also came in close to the values of recent years - higher than 2012 and 2016, it would seem, but lower than 2013-2015.  However, according to PIOMAS, the volume of sea ice remains well below the then-record low 2007 value, and this is an important contrast with the sea ice area and extent data.  Based on volume estimates, then, there is perhaps less reason to be optimistic about any possible slowdown or reprieve in the rate of Arctic ice loss. 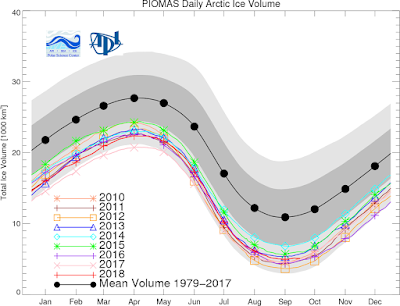 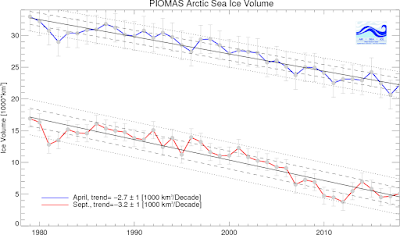