As a postscript to my earlier analysis of the intense ridge over the Bering Sea and western Alaska (see here and here), the charts below indicate the magnitude of the recent 500mb anomaly at 15-day, 30-day, and 45-day time scales compared to the Northern Hemispheric extremes since 1958.  As before, we're looking at the standardized 500mb height anomaly, i.e. the departure from normal divided by the standard deviation, and I've removed the (seasonally-varying) long-term linear trend at each location.  The charts show the daily maximum and minimum values of the standardized anomaly across the entire Northern Hemisphere since 1958.  Click to enlarge the images. 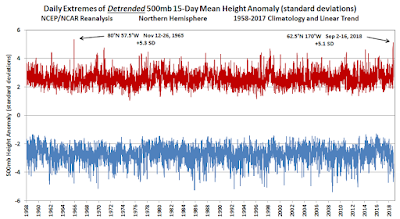 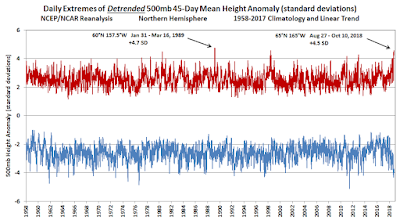 Based on this analysis, the upper-level ridge that affected western Alaska in recent weeks was most anomalous on a 30-day time scale.  Remarkably, the 30-day standardized height anomaly at 500mb just to the south of Nome was the most extreme in the global reanalysis history back to 1958, for either Northern or Southern Hemisphere, and for either positive or negative anomalies.  Here's a map of the peak 30-day height anomaly: 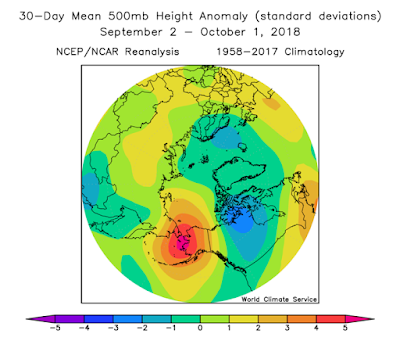 In the earlier post I noted that the record 15-day ridge was an extreme high-pressure block over northern Greenland in November 1965.  But interestingly the record event for a 45-day time scale was also over Alaska, in the late winter of 1989.  This event appears to have been related to a major disruption of the stratospheric polar vortex (a "sudden stratospheric warming") in February 1989. 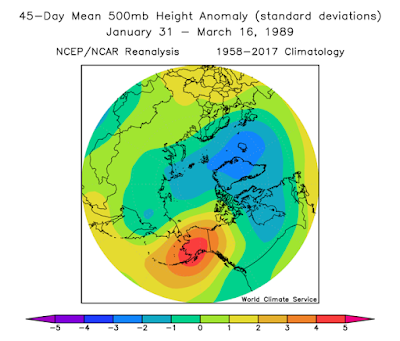 Finally, here's a chart showing Southern Hemisphere extremes on a 45-day basis.  The record for most anomalous ridge occurred near the southern tip of South America in the early austral winter (late April - early June) of 2016. 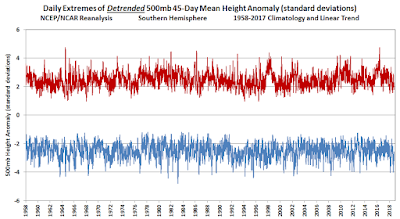 Posted by Richard James at 7:41 AM