Still No Snow in Fairbanks

The calendar says we're already in mid-October, which is just about the end of interior Alaska's short autumn.  According to climate statistics, the temperature often struggles to rise much above freezing from this point on in Fairbanks, and snow is on the ground more often than not after the 15th.

But this year, like some other recent years, is much different.  Remarkably, no snow at all has been observed yet at Fairbanks airport - not even a half-melted flake or a momentary flurry, although some snow occurred at last yesterday in the hills outside town.  According to the NWS, this is the latest that Fairbanks has gone without seeing any snow at all.

Snow is also absent across vast areas of western Alaska, and the cause is two-fold: excessively mild temperatures and a lack of precipitation.  The dry conditions are of course closely tied to the astonishing ridge that has prevailed lately over the Bering Sea and western Alaska.  And the warmth is amazing: Kotzebue has not even seen a freeze yet, which is also an all-time record.

Looking out at water temperatures in the Bering and Chukchi Seas, a tremendous amount of warmth is evident at the ocean surface.  Here's Rick Thoman's depiction of September's departure from normal in sea surface temperatures.


Sea surface temperatures around Alaska were near to much above normal in September except for parts of the Beaufort Sea. Except for the Beaufort and northern Chukchi Seas, these SSTs are warmer than Sept 2017. #akwx #Arctic @Climatologist49 @amy_holman @IARC_Alaska @lisashefguy pic.twitter.com/VAkkUQVX2x
— Rick Thoman (@AlaskaWx) October 11, 2018

And here's a chart (click to enlarge) showing the daily trajectory of SSTs in the southern Chukchi Sea, to the north of the Bering Strait.  The red line indicates this year's data, while the gray shaded area shows the minimum and maximum values for each date in the 1981-2017 history.  Since September 19, the average sea surface temperature has been at record high levels; the area average is still above +5°C, which has not been observed at this date before.  The previous record years were 2007 (for the entire summer) and 2016 (from early October through freeze-up). 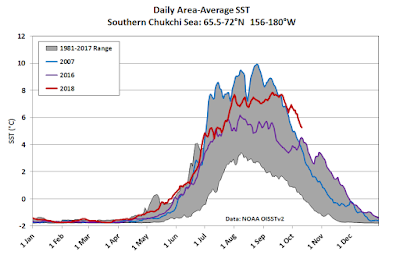