Hi, Rick T. here. In searching back through Deep Cold posts, it looks like we've never put up a review of a subject near and dear to my heart: an overview of point-based weather and climate observations in Alaska. So, I thought it might be worthwhile to lay out some of the details. Note: this piece is acronym heavy. I've included a decoder table at the end.

When it comes to weather observations: right now here in Alaska, we are living in the golden age of real time environmental observations: the good old days were definitely not always good. When I started with the NWS in Alaska in 1988, for most of the year there were less than four dozen reliable, real-time 24-hour/per weather observations in the entire state, and some of those (ones with the asterisk in the graphics below) only had temperature, wind and pressure for part, or all, of the day. Every single one of these were operated by either then NWS, FAA or DoD. 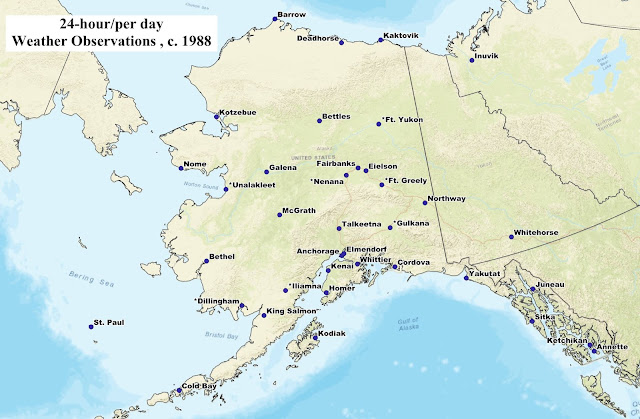 There were more part-time or irregular weather observations the 1980s. There were perhaps 20 contract aviation observations (paid for by NWS or FAA) that took 6 to 16 observations a day, e.g. Umiat, Slana and Ambler. By the late 1980s the DoD dew line stations were no longer regularly reporting 24 hours per day but sent observation on an occasional schedule. There were a tiny number of NWS operated remote stations (RAMOS) that reported temperature and winds and were still operating in places like Anaktuvuk Pass and Sitkanak (southern Kodiak Island). There were some, but not usually real-time observations from a small number of the Soil Conservation Service (now NRCS) SNOTel sites. In the summer there were even more, from Alaska Fire Services RAWS (which were deployed and then removed at the start and end of the fire season) and from relatively few river gauges which had temperature and tipping bucket sensors.

Fast forward to today: a quick count of observations in Alaska available on the MESO-WEST website for 3am Saturday morning revealed about 785 separate observations with at least one meteorlogical element, and to that you could add more than a dozen more home weather stations that are online only on Weather Underground. Here's a graphic I made up in 2017 that identifies the operators and types of observation in the eastern Interior and Copper River Basin. 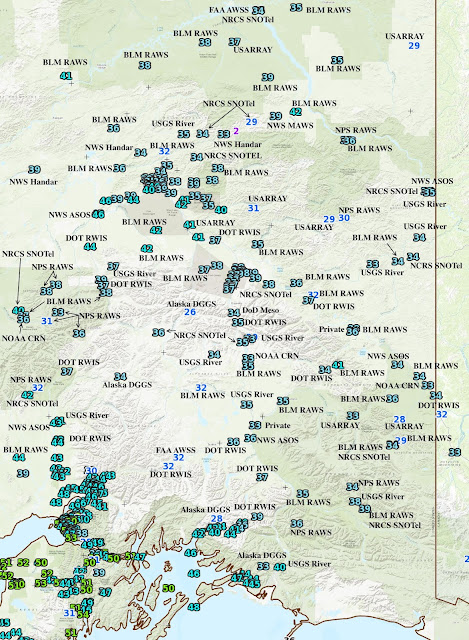 This shows most of the classes of 24 hour per day weather observations that are currently deployed around Alaska, with the exception of some coastal specific observations. You'll see that most of the platforms belong to some Federal agency (e.g. NWS, FAA, BLM, NRCS) but there are some others, including state of Alaska DOT and private (the home weather stations). The stations marked as USARRAY are an interesting class. These are actually part of a temporary, high density seismic monitoring network on which weather sensors have been installed. Only a  fraction of the stations have weather stations included (the full map is here). These stations have provided never before seen real-time weather detail over the North Slope and Brooks Range, you can as see in this graphic (same 2017 project): 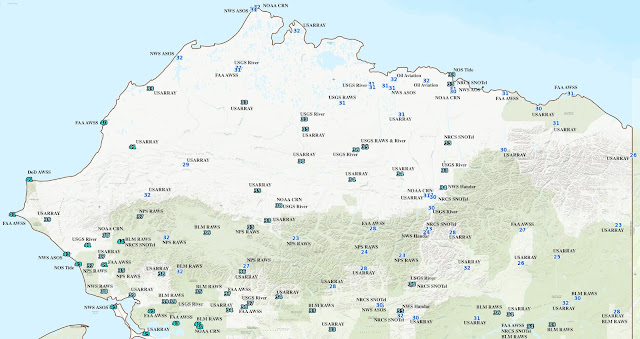 On the climate side of the house, it's a different story. The March 1988 edition of the NCDC publication Climatological Data had data from about 130 stations in Alaska reporting daily temperature extremes and precipitation data, and this represents the vast majority of climate observations that were made that month in Alaska. About 75 of these were NWS cooperative sites which made observations once a day and the rest NWS and FAA (including the contract observations) and DoD sites. In March 2018, there were just over 100 stations with data in that publication, and NWS cooperative sites was still number about 75. The losses are mostly from the drop off of the aviation contract and DoD sites: almost none of those became strictly cooperative stations.

The big difference beween 1988 and 2018 is that now there are multiple sources of readily available climate data that are not included in the Climatological Data publication. These include explicit daily climate data from unaugmented NWS ASOS (e.g. Kaltag and Seldovia) and the nearly two dozen NCEI flagship Climate Reference Network stations as well as derived climate data from the 100+ RAWS (mostly operated by the Alaska Fire Service and National Park Service) and four dozen NRCS SNOTel sites. Now one can question the climate value of some of these platforms, e.g. RAWS, which we know report temperatures that are too warm during high-sun, low-wind situations to due insufficient thermistor shielding, but clearly, Climatological Data is no longer the definitive source for Alaska climate data. Rather, it's perhaps the definitive source for NWS cooperative data, only some of which is reported in near real-time, and of course this does (eventually) make it into online climate sources, e.g. the NWS NOWData and scACIS.

But that's not the end of the story. Since 2010 the FAA has upgraded nearly all of the early 1990s era AWOS, the first generation automated operational weather observing systems that included visibility and ceiling height, with modern automated equipment which is functionally very similar to the NWS ASOS, as well as installing this modern equipment at at airports that previously lacked any weather observations. There are about 80 of these these FAA owned and operated systems that report temperatures and precipitation in the same way as ASOS, including sites with long histories of climate observations as well as sites that have never had climate observations before. While these systems don't handle frozen precipitation, the temperature data is reliable, but at the moment none of this is being used systematically in most climate analyzes. It's not true that it's been tossed out: the data is all archived at NCEI and other online locations, but we're not making much use of it. Here's a plot of these stations climate data we're not using: 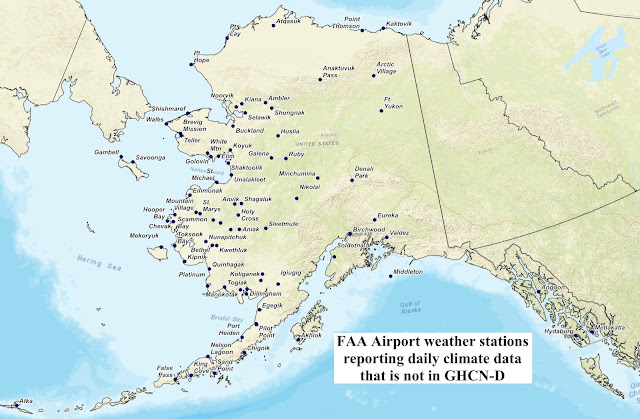 As a sidenote, I do keep track of the daily data from several of these location that have historic climate data (Kaktovik, Unalakleet, Gambell, Ft. Yukon) and use it in my work. So while we have many, many more weather observations nowadays, climate data has not expanded, and in fact over much of northern and western Alaska we have less now than we did 30 years ago.