Today the U.S. Climate Prediction Center came out with their seasonal forecast for winter, i.e. December through February, and to probably no-one's surprise they are showing a rather high chance of above-normal temperatures in Alaska in the coming months.

By way of reminder, the CPC forecast is probabilistic and aims to predict the chances of each of the three terciles of the 1981-2010 distribution; so a 50-60% chance of "above normal" (as for most of Alaska above) means that the probability of the upper tercile is 50-60% rather than the baseline normal probability of 33%.  This is a big shift in the probability distribution and a very strong warm signal; it's the first time that CPC has shown such a large area of 50+% warmth in Alaska for Dec-Feb.

My blog co-author Rick will be presenting much of the rationale behind the forecast in his regular monthly webinar tomorrow, and listeners are guaranteed to learn something even if they're already familiar with the complexities of seasonal forecasting.

Not to steal Rick's thunder, but I'll suggest just a few reasons why a very warm forecast seems reasonable if not inevitable.  First, sea surface temperatures to the west and south of Alaska have been extremely warm in recent months, so regardless of how the weather pattern plays out, there is a lot of residual heat available.  The map below (click to enlarge) shows that October SSTs were more than 3 standard deviations above the 1981-2010 normal near Alaska, according to NOAA's ERSST data.  This is a pretty extraordinary warm anomaly. 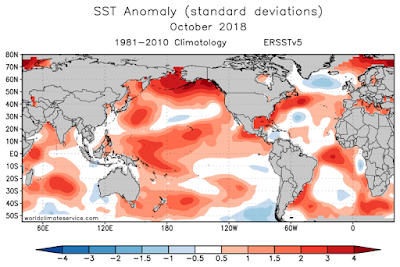 Second, El Niño has developed in the tropical Pacific Ocean.  As we speculated back in July (see here), this El Niño episode is focused in the central rather than eastern tropical Pacific, so it's a so-called Modoki El Niño.  It's interesting to consider the different implications for Alaska of having a Modoki rather than East Pacific El Niño; I've found that the results are a bit sensitive to the definition that's used, but the overall message seems to be that Modoki episodes favor warmth more widely across the Bering Sea - Alaska region.  East Pacific El Niño's are more closely linked to warmth in eastern and southeast Alaska than in the rest of the state.  But in any case, an El Niño winter is most definitely a warm signal overall. 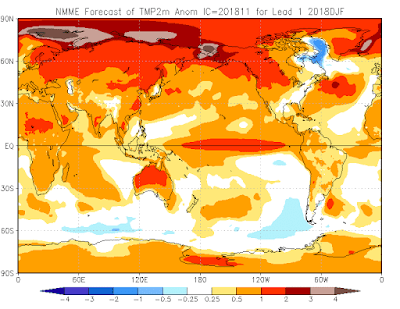 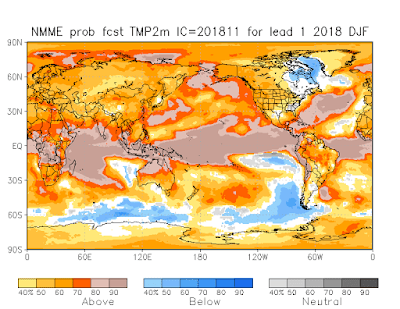 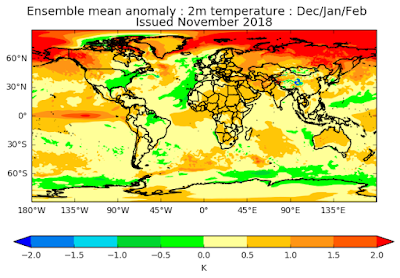 And the Japanese seasonal model - see below.  It's a little hard to see the coastlines, so I've circled Alaska in red.  The top left panel shows 500mb height, indicating a southerly flow over Alaska; the middle left panel shows 850mb temperature - note that the model expects the warmest conditions in the Northern Hemisphere (relative to normal) over Alaska.  The bottom left panel shows sea-level pressure - note the Bering Sea trough. 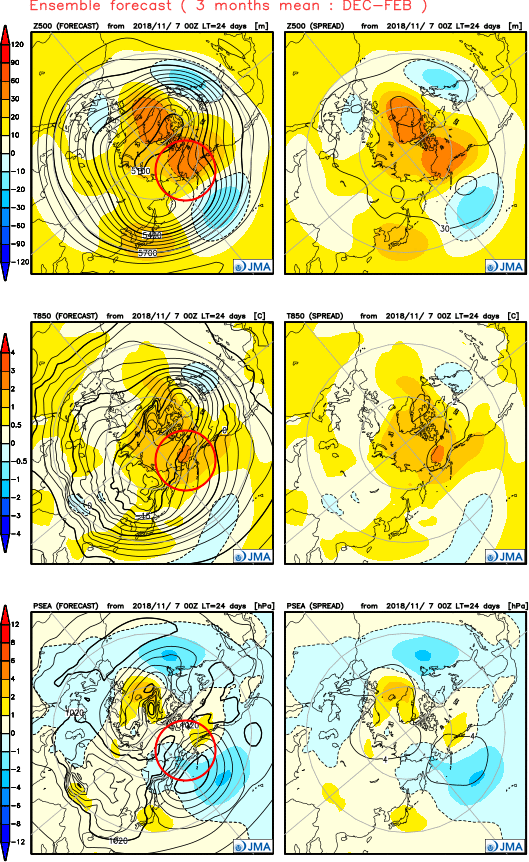 Finally, the map below shows a statistical forecast based on sea surface temperatures that I developed at work recently; this is an ensemble mean forecast from a number of models that have undergone cross-validated historical testing to determine the optimal predictors.  Note that the baseline is the 1950-2017 trend, so the forecast for Alaska would be even warmer relative to the standard 1981-2010 climatology.  The skill of these statistical forecasts is modest at best, but they're worth having because they provide independent guidance to complement the computer models. 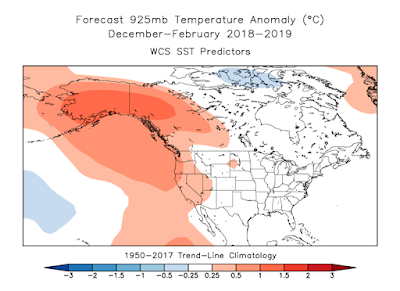 So is there any contradictory guidance showing a cold or even a normal winter?  Having looked at a very broad collection of predictors in the past couple of weeks, the answer is "almost none".  The only hint I found was in looking at past years in which late summer and early autumn produced strong and persistent high pressure ridging over the northern North Pacific, similar to this year.  The subsequent winters had a modest tendency for unusual high pressure over the Bering Sea, which is a cold pattern for Alaska (see below); but the signal is not very striking, and in any case most of the "analog" years are taken from earlier decades that were colder to begin with.

Tune in to Rick's talk tomorrow for much more detail and considerably more expertise related to the winter forecast! 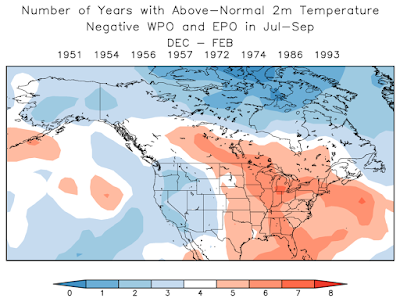