The cold snap is on its way out across Alaska now, as Pacific low pressure approaches from the southwest and a blanket of clouds aloft provides a warming influence.  McGrath saw the temperature rise from -50°F this morning to "only" -18°F this evening as the sky turned overcast.  However, severe cold is hanging on across the north, with -40s in the Yukon flats, and Umiat is currently sitting at -52°F on the North Slope.

Here's a chart showing some statistics for winter cold in Alaska since the turn of the century.  The black markers show each winter's statewide minimum temperature, and the columns indicate the number of daily reports in which the daily minimum temperature reached -40°F and -50°F.  This is based on data from NOAA's ACIS tool, which includes daily temperature data from about 400 sites (but closer to 300 at the beginning of the century). 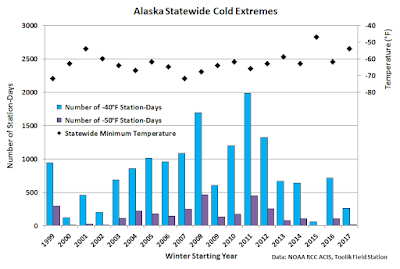 The frequency of extreme cold has been on quite a roller coaster, with (for example) -40° or colder showing up somewhere in the state on 89 separate days in winter 2011-2012, but only 25 days in 2015-2016.  (But this ignores the confound of mismatched observation times, such as morning coop reports.)

See here for an earlier post about statewide minimum temperatures on a longer time scale: