The past six weeks have seen some fairly persistent cold weather over the Bering Sea and western Alaska - much more so than over the rest of the state, where prior to the recent cold spell the winter had been relatively warm.

In response to the cold in the west, sea ice has expanded in the Bering Sea, and the ice area exceeded half a million km2 just the other day.  In the 1981-2010 period, this milestone was typically reached just after the new year.  So the ice growth is still a bit behind "normal", but it's a big recovery from last year.

NOAA's latest daily sea ice analysis shows the ice pack extending to the south of Nunivak Island but not yet reaching St Matthew Island farther to the west. 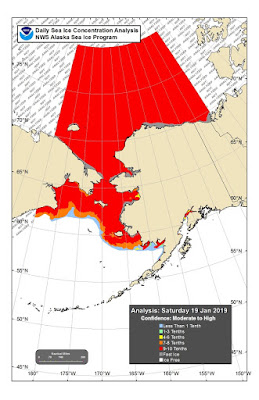 The NSIDC analysis is very similar. 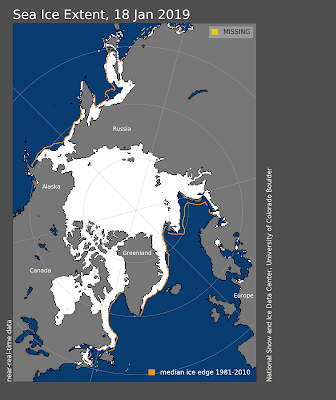 The chart below shows the recovery off last year's record-low ice extent in the Bering Sea - we already have more than last winter's peak extent - but we're nowhere near the high ice coverage of just 7 years ago.  The Bering ice extent of 2011-2012 was the highest in the modern satellite record for most of the mid-winter and meltout period, so sea ice has been highly variable in the Bering Sea over the last decade (to say the least). 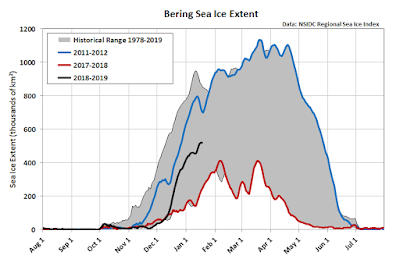 The NSIDC provides ice extent data for other regions of the Arctic basin, so it's interesting to compare the long-term trends in both March (seasonal max) and September (seasonal min).  See the chart below, showing the 40-year linear trends in percentage terms, i.e. the trend divided by the 40-year mean ice extent for each region.  Of course some of the regions melt out completely every September, and many freeze up completely every March, so those cases have undefined and zero trends respectively. 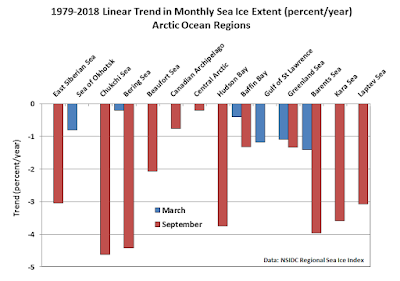 Obviously the changes in ice extent have been much more dramatic at seasonal minimum, but nevertheless there have been highly statistically significant decreases in March ice extent in some of the basins - notably in the North Atlantic sector (e.g. the Greenland Sea and the Barents Sea).  However, it's the Chukchi Sea that has the dubious distinction of the greatest percentage loss in September - see below.  (Note that while the Bering Sea loss is also very high in September, the actual numbers involved are very small; another viewpoint would be to look at the absolute change in ice extent over time.) 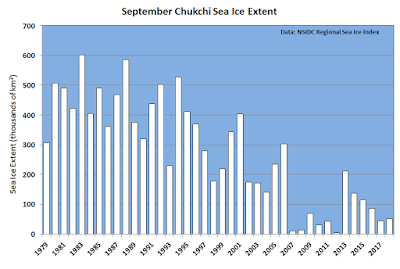 Posted by Richard James at 4:02 AM