Alaska's North Slope is gradually and belatedly cooling off as autumn advances, and today's scene in Utqiaġvik (Barrow) has a more seasonable look with snow on the ground and an early sunset (about 3:30pm solar time) to the southwest. 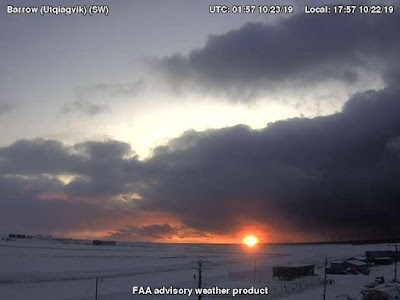 Teshekpuk Lake, to the southeast of Utqiaġvik and slightly inland, appears to be mostly but not entirely frozen over, judging from a satellite image from this afternoon (click to enlarge, and compare to last week's image): 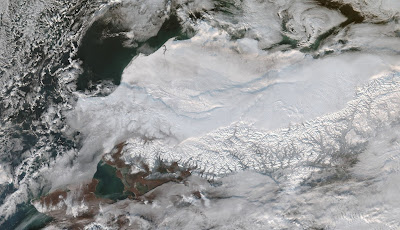 Rick Thoman noted on Twitter the record-breaking warmth over the summer in Utqiaġvik - the attractive figure below is Rick's creation.  The sum total of heat units for thawing was easily the highest on record and amounted to 3-4 times the totals from some colder years of about a half-century ago.  The monthly TDD totals in both July and September were records, as were the monthly mean temperatures, and both by a large margin. 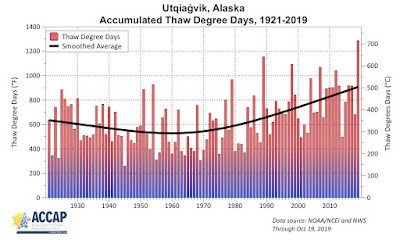 Here's a chart showing the 365-day running average temperature since 1930 in Utqiaġvik, plotted in degrees Celsius to highlight the diminishing difference from 0°C/32°F.  One could be forgiven for thinking that the upward trend is accelerating, as the past few years have been really extraordinary. 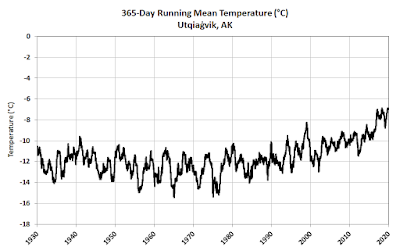 The chart below provides a closer look at the last 25 years.  It's curious to see how the temperature "broke out" in 2016-2017, as it suddenly exceeded a level (around -9°C) that previously served as an approximate upper limit, and ever since then it has remained above that level.  Those who are familiar with technical analysis in the financial markets will recognize this kind of behavior, as financial instruments like stocks tend to show "resistance" and "support" levels in the price action.  Perhaps some of the same tendencies can emerge from systems governed by physical laws rather than laws of human behavior. 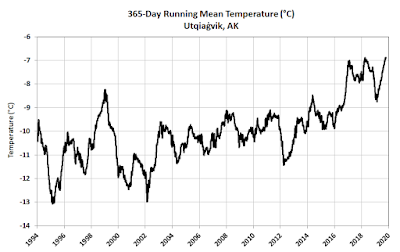