In the first two installments of this discussion (here and here), I made a few comments about Alaska's surprisingly cold winter and the difficulty of finding a good explanation for it.  Of course from one perspective the reasons are obvious: the circulation pattern produced more northerly and westerly flow (and less southerly flow) than usual over the state, leading to a much-reduced influence of mild Pacific air.

The pattern is illustrated by the 500mb height anomaly map, which shows an unusual trough centered near the southeastern interior and a strong ridge over the central North Pacific. 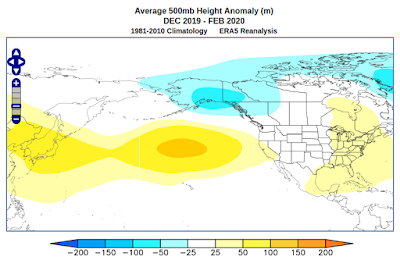 A very strong westerly flow is implied between the ridge and the trough, and this strong and stable jet stream pushed warm air eastward into Canada and the Lower 48 rather than taking occasional (or frequent) northward excursions into Alaska.  Here's a map of the vector wind anomaly at 250mb; the westerly flow was more than 12 m/s stronger than normal to the south of Alaska. 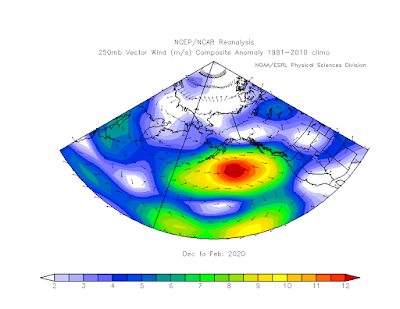 For reference, here's the normal upper-level wind pattern in winter: 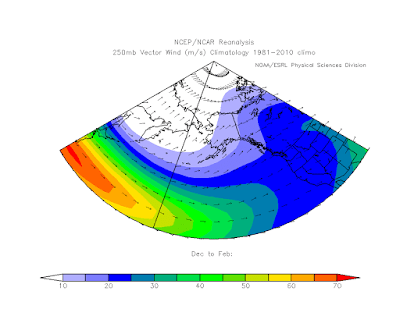 The map below shows the resulting temperature anomaly pattern, which really highlights that the configuration was "perfect" for bringing cold to the heart of Alaska; the state experienced an "island of cold" in a sea of unusual warmth (and I'm not showing Eurasia, which was much warmer still). 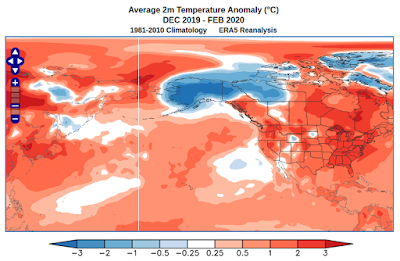 Another key aspect of the flow regime was a positive phase of the Arctic Oscillation (AO), indicating that (i) low pressure was unusually low in the Arctic, (ii) the mid-latitude westerly jet stream was unusually strong, and (iii) there was a strong contrast between unusual warmth in the mid-latitudes and relatively cold conditions in the Arctic.  The positive AO anomaly became increasingly pronounced as winter progressed, and the daily AO index reached all-time record positive values in February. 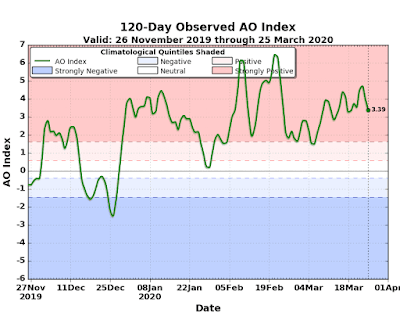 The AO phase has a modest connection to Alaska temperatures in winter, as illustrated by the chart below.  Note that I'm using detrended temperatures based on data since 1950, and yes, it was the coldest winter relative to trend since 1950.  However, the trend since 1950 is very steep (over 1°F/decade), and this winter's cold was less remarkable when compared to a longer-term trend or simply a long-term average. 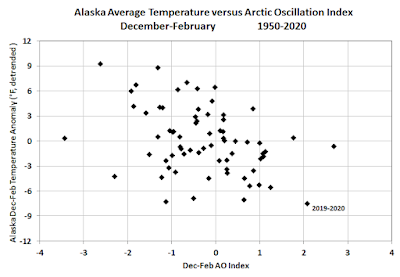 The chart indicates that below-trend temperatures tend to be favored when the AO phase is positive, and this provides a reasonable connection between Alaska's cold winter and the larger Hemispheric flow pattern.  However, it's interesting to see that this winter's flow pattern over Alaska was not particularly well-aligned with the typical positive AO pattern.  The map below shows the average 500mb height departure from normal in the top 10 positive AO winters of the past, and while the same strong north-south gradient is evident across the North Pacific, the AO pattern usually has a trough axis near the Chukchi and Bering Seas rather than over eastern Alaska. 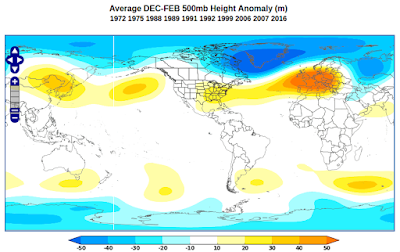 The temperature pattern associated with the positive AO phase reveals a cold signal over southwestern Alaska (see below), which is certainly consistent with what happened this winter; but it seems the positive AO is not typically associated with more widespread cold across the interior and north.  As an aside, it's interesting to see a negative PDO-like temperature pattern across the North Pacific in these winters, and indeed the PDO was negative in 7 of the 10 winters (as it was this winter). 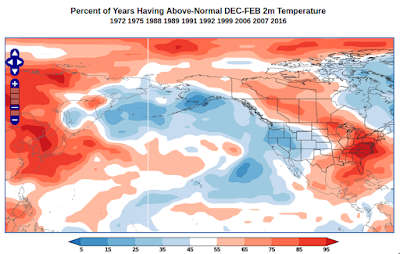 A closely related, and significant, feature of the Northern Hemisphere winter was the unusual strength of the polar vortex up in the stratosphere.  The stratospheric polar vortex forms every winter and has a fairly close connection to the lower-atmosphere AO phase, but the two don't always behave in tandem over the course of a winter.  However, this winter the polar vortex was strongly coupled, especially in late winter, and the upper-level vortex became remarkably intense by late winter - see below. 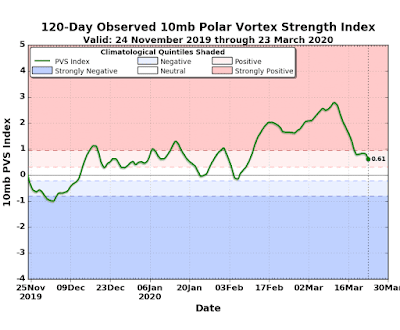 Does the presence of a strong stratospheric vortex alter or magnify the AO temperature signal over Alaska?  Not really; the map below shows winters with both a positive AO phase AND a significantly stronger than normal stratospheric vortex, and it's a very similar signal to the AO pattern by itself. 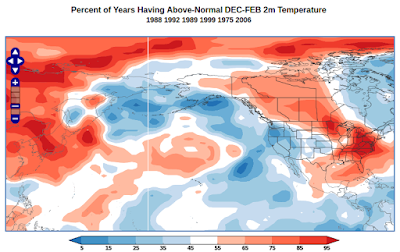 So are there any winters in the historical record with a similar strong polar vortex/AO phase and more widespread and pronounced cold in Alaska?  The answer is yes; the winter of 1989-1990 was notably cold in Alaska, and the AO became increasingly positive (indeed extremely so) as winter wore on, similar to this winter.  The previous winter, 1988-1989, is probably more memorable to Alaskans because of the incredible cold snap in January 1989, but the subsequent winter of 1989-90 was actually colder overall, and February 1990 was bitterly cold (easily the coldest February on record for the state).

Here are the 500mb and surface temperature maps for 1989-1990: the match is by no means perfect, but it's a good deal better over the North Pacific and Alaska domains than with the positive AO composites.  Notice in particular the relative absence of cold in southeastern Alaska and the Aleutians, and the warm region over the northeastern North Pacific to the west of Oregon - all similar to this winter. 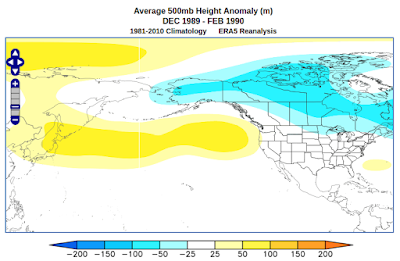 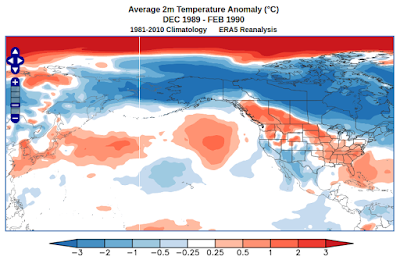 The similarities between these two winters, separated by exactly 30 years, are sufficiently intriguing - especially in regard to the dramatic strengthening of the AO phase in late winter - that I'll have to dig deeper and try to understand what was going on.  And that means readers can be on the lookout for Part 4 of this discussion in due course.