Summer Over, But More Rain

Personal circumstances probably won't allow me to post much in the next few weeks, but I'll aim to make a few comments here and there as the season changes; and change it already has.  Frost was widespread across the central and eastern interior on Sunday morning, with the typically colder spots dropping well below freezing in completely normal fashion.  UAF's Smith Lake sensor dropped to about 25°F, but the airport only saw 34°F.  The normal date for first freeze at the airport is right about now.

Here are some of the minimum temperatures around the region (click to enlarge).

The frost followed a couple of chilly, damp days that were unmistakably autumnal, with temperatures stuck in the low 40s in the hills on Saturday.  Again, nothing unusual about that in itself.

What is unusual is the fact that measurable rain has fallen every day so far this month in Fairbanks: that's 8 days and counting after today's significant rain.  No other September (1930-present) has started off with more than 6 of the first 8 days with rain.

Here's a view of foliage up at Cleary Summit (2233' elevation) this afternoon.  Not as much color in the leaves as I expected, given the date; but it will be changing fast this week. 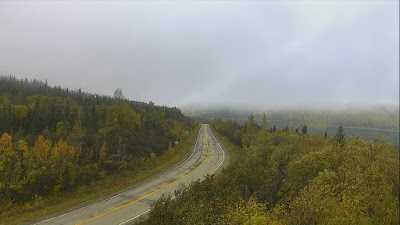 Posted by Richard James at 2:10 PM