The Fairbanks airport thermometer dropped to 0°F for the first time this season yesterday morning; this is a few days earlier than usual.  The chart below shows the date of this annual occurrence, which usually happens after the establishment of permanent winter snow cover (but not in about 10% of years, including 2016, 2017, and 2018). 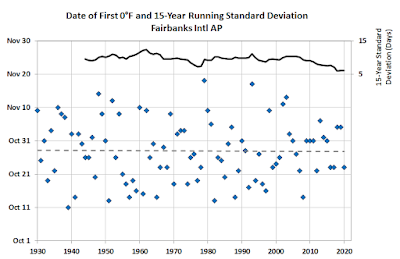 To me, the interesting aspect of this chart is not so much the lack of long-term trend (as illustrated by the dashed line), but the reduction in variance in recent years.  Since 2009, the first 0°F has not occurred earlier than October 22 or later than November 6, a span of only 16 days; but earlier decades were much more variable.  In fact, fully half of all years from 1930-2009 saw the first 0°F outside the Oct 22 - Nov 6 range; and so the chance of not falling outside that range for 12 straight years is extremely small based on random chance alone.

What might explain the lack of variance in the past decade?  Perhaps the weather patterns have been fundamentally less variable at this time of year; it would take some work to examine whether that is true.

I suspect rather that it's a combination of two factors: first, the overall warming trend, which is very pronounced in the Arctic at this time of year (related to low sea ice), would tend to prevent 0°F being reached at an early date; it's just not cold enough in the atmosphere at large.  For instance, perhaps the +3°F on October 16 this year would have been 0°F in earlier decades.

But a contrary influence may be in play as Arctic weather patterns change in response to the drastic reduction in October sea ice extent; it's possible that late Octobers of the last decade have not produced the kind of weather that keeps temperatures up until a later date.  There's a hint of evidence for this if we look at the average pressure and 500mb height from the last 10 years at the critical time of year: 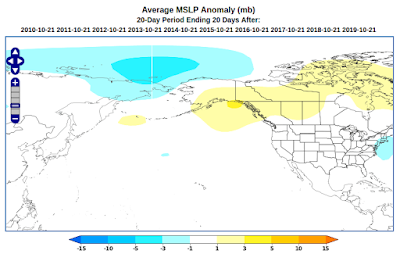 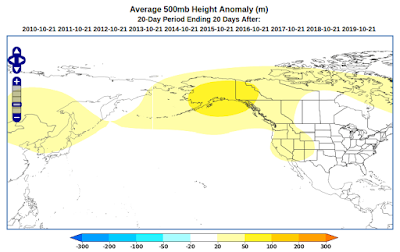 In general, late October and early November of the past decade have tended to see low pressure over the Chukchi Sea and a ridge over Alaska, and I would interpret this as favoring generally clear skies and calm conditions in Fairbanks - which in turn would favor colder overnight low temperatures at this time of year.  It seems plausible that the Chukchi Sea trough is related to excess warmth and open water there, so the persistent pattern may be developing at least partly in response to the Arctic changes.  I wouldn't want to be definitive about this; but it does seem unlikely to be a coincidence that this particular nuance of Fairbanks climate has changed so noticeably at the very time of year when sea ice reduction might produce its largest effect.