I haven't mentioned Arctic sea ice since its seasonal minimum a month and a half ago, but in recent weeks an extraordinary situation has been unfolding on the Russian side of the basin, with a rapidly growing ice deficit as freeze-up is delayed across large areas.  The latest graphics from NSIDC illustrate this clearly: ice free waters still exist all the way from the Barents Sea across to the Chukchi and Bering Seas. 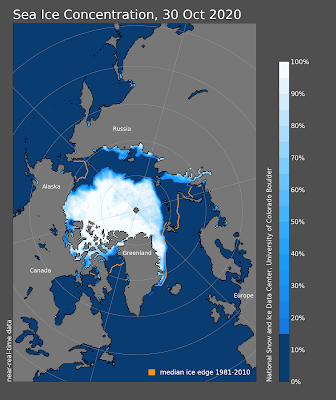 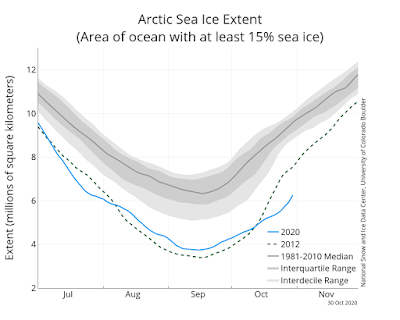 In the last several days, the Arctic-wide ice extent has been more than 10% below the previous record low for the time of year, which was in either 2016 or last year, depending on the date.  Here are the October 30 ice concentration images from those two years.  (Note that NSIDC's extent number comes from the area with at least 15% concentration.) 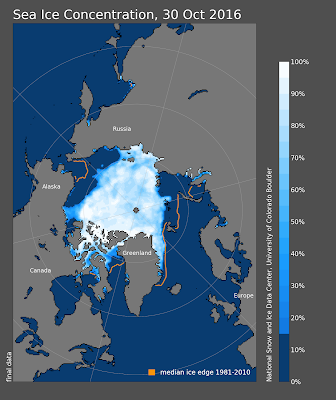 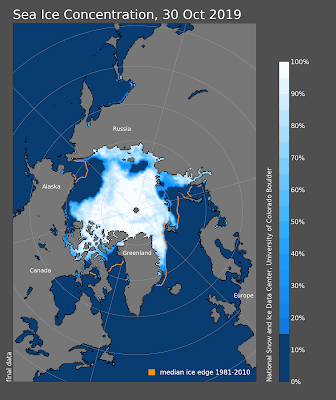 Perhaps most remarkably, the ice extent is now more than 5 standard deviations below the 1981-2010 normal for the date; it crossed this threshold for the first time on record just 3 days ago.  The time-series chart above shows why: the 1981-2010 range of variability tightens up a lot during October, so a much-delayed freeze-up like this year becomes increasingly anomalous compared to that range.

Here's a chart of the annual range of standardized daily ice extent anomalies.  The top of each column is the highest anomaly in the year, for example just below -1 standard deviation this year; the daily ice extent has not been above the daily normal since the spring of 2012. 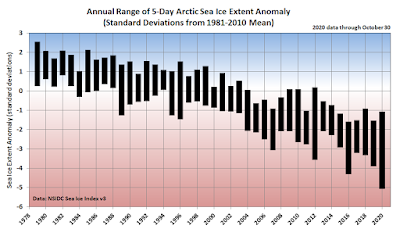 It's interesting to see the rather steady progression of lower minima every few years; 2007 set a record minimum for ice extent at the time, 2012 set the record that still stands, and 2016 was another very low ice year (especially in the spring and autumn, like this year).  The downward march of ice loss extremes highlights the ongoing trend more clearly than, say, the September ice extent, which arguably has not had much trend since the big meltout of 2007. 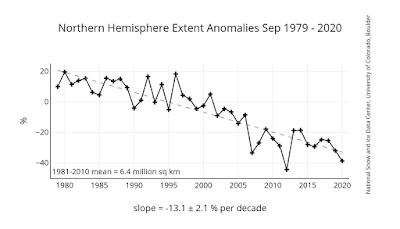