Work and life have been a little too busy for posts lately, but earlier this week I saw a brief new article published in Nature Climate Change on the topic of Arctic warming and its possible impacts on mid-latitude climate.  Here's a link for reading (it's very brief):

The authors (Blackport and Screen) are in the camp that has pushed back against the much-publicized idea that rapid Arctic warming may be significantly affecting weather patterns at lower latitudes; the hypothesis is that rapid Arctic warming is producing greater "waviness" in the jet stream and more frequent mid-latitude cold outbreaks in winter as Arctic air is discharged to the south.  My impression is that this hypothesis gained a lot of credence until quite recently, but it seems the pendulum is now swinging back the other way.  This new piece, and a review article earlier this year by Cohen et al. that argues in the other direction, add fuel to the fire of controversy.  A pdf copy of Cohen et al. can be found here.

It may be a little presumptuous to weigh in on a topic that is attracting so much attention from very competent researchers, but I've been looking at this for work, and a couple of issues do seem worthy of comment.  First, there's no question in my mind that Arctic "blocking" has simply not increased in parallel with the dramatic loss of Arctic sea ice.  In contrast, there's a clear case to be made that the winter jet stream has often been stronger and more uniformly westerly in recent decades than before the era of strong Arctic warming.  The chart below shows the Arctic Oscillation index since 1950 for winter (blue) and summer (red), and it's clear that the December-February index values have been generally more positive since 1988 than before.  If we focus only on 1988-present, as Cohen et al. did, then we might claim a downward trend through about 2013, but the larger context tells a different story. 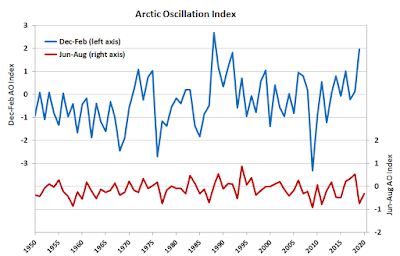 The North Atlantic Oscillation, which is closely related to the AO but focuses on the jet stream behavior over the North Atlantic sector, shows a similar picture; it's been 10 years since there was a significantly negative NAO phase in winter (see below).  I see no evidence of increased winter blocking (more negative NAO), but rather the reverse is true for the full period since 1950.  However, it certainly is interesting to see that the summer NAO has frequently been significantly negative in recent years.  This reflects an association between summer weather patterns and sea ice loss - but which causes the other is difficult to say.  I discussed the summer ice/weather connection back in September. 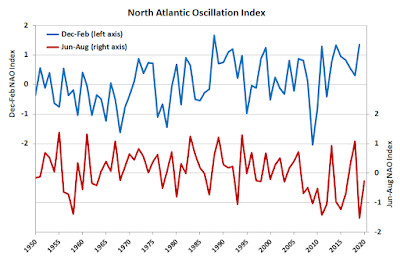 If we look at the strength of the winter-time westerly winds at 60°N (a latitude that's commonly used to monitor the status of the stratospheric polar vortex), there is zero trend from 1960-present in the lower stratosphere (100mb).  At the mid-stratosphere level of 10mb, the ERA5 reanalysis data suggest a slight decrease in winter westerly flow, but the trend is nowhere near statistically significant.  At 500mb, in the mid-troposphere, there's a slight increasing trend, but again not significant. 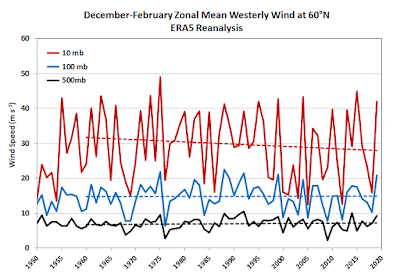 In view of this data, I agree with Blackport and Screen that the evidence doesn't support the purported mechanism for increased mid-latitude volatility; the winter-time jet stream and polar vortex have not weakened, and if anything the large-scale circulation modes (AO and NAO) have become less favorable for mid-latitude cold outbreaks in winter.

Second, I also concur with Blackport and Screen that there's very little reason to believe that mid-latitude land areas have seen "almost no warming" (to quote Cohen et al.) in winter during the era of Arctic amplification (i.e. the last 30 years or so).  Here's a chart showing mid-latitude land area temperature trends for December-March from various sources (December-March was used by Cohen et al.); click to enlarge. 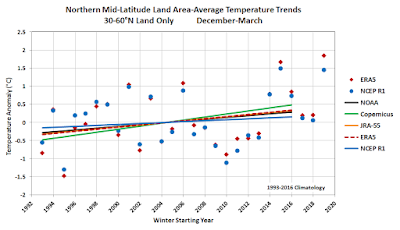 Here I've calculated trends for 1993-2016, which is the period for which model forecasts are available from the seasonal dynamical models included in the EU's Copernicus program.  I'll comment on these models below.  For now, notice that the smallest warming trend is found in the NCEP global reanalysis ("R1"), and this is the source that was used by Cohen at al. to support their statement that "the observations show that temperatures across the midlatitude continents have remained nearly constant".  Unfortunately, the NCEP reanalysis is a 25-year-old model that runs at a very coarse resolution and simply doesn't represent the state of the art for climate reanalysis.

In contrast, the modern ERA5 and JRA-55 data sets show greater warming trends and agree closely with each other.  These also agree quite closely with data from NOAA's surface temperature analysis, which is derived from surface observations rather than estimated from a model.  It's clear that ERA5 has tended to be warmer in recent years, and cooler in earlier years, than NCEP R1 (with both series having the same zero-anomaly baseline here).  If we had measured the temperature trends ending in 2013, we might have tentatively concluded that the data was hinting at more cold air discharge to the mid-latitudes, but the last several years have greatly weakened that hypothesis, in my view.

Having said all that, it is interesting to see that the observed mid-latitude warming has not been as great as the Copernicus models expected in their November-issued forecasts for December-March (as illustrated by the green trend line above).  Compare the two maps below, showing the spatial distribution of trends in the Copernicus and ERA5 data.  The Copernicus forecast models show considerably more warming in central and eastern Canada and the contiguous U.S., and there's also a much broader zone of warming in western and central Russia.  ERA5 even shows a few areas of cooling, but these aren't captured in the Copernicus forecasts. 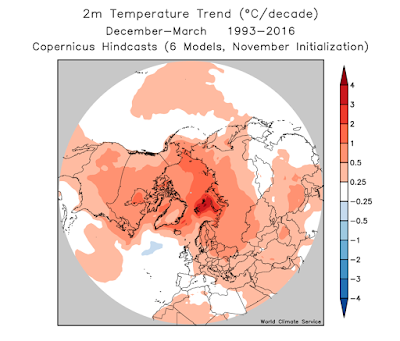 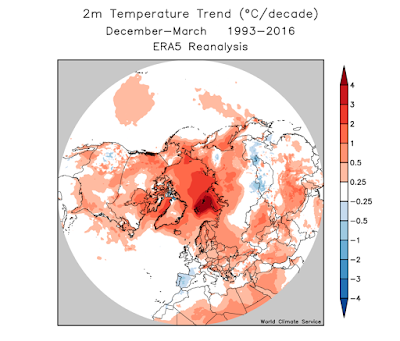 I think it's fair to say, then, that mid-latitude temperature trends in the past couple of decades have not conformed to model expectations, as warming has not been as widespread and pronounced as the models predicted.  This much is consistent with Cohen et al., and so I think we can't yet rule out the possibility that Arctic amplification has a systematic effect that dampens warming in the mid-latitudes.  However, if this is happening, it's not because Arctic blocking has increased or the polar vortex has weakened, so I believe the fundamental mechanism proposed by Cohen et al. is not correct.

In my view, the most likely explanation for the relatively small mid-latitude warming is that natural variability of weather patterns has produced a trend on the low side of what might be expected.  With only about 30 years of data to work with, sample size is obviously a huge problem for assessing whether the models are "right".  Time will tell, of course; but I suspect we will eventually dismiss the counter-intuitive idea that Arctic warming causes mid-latitude cooling.

For the sake of completeness, here are the temperature trend maps for NCEP R1 (very unrealistic cooling over Asia), JRA-55, and NOAA. 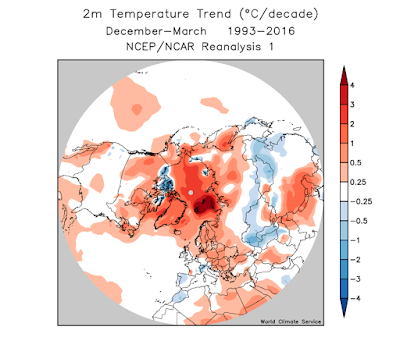 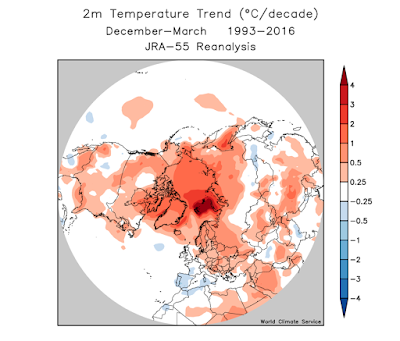 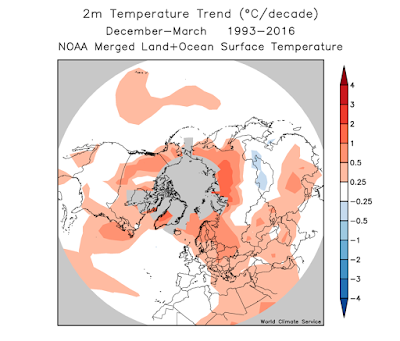 And here's a chart of high-latitude trends, for both land and ocean: 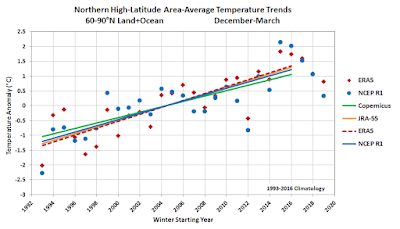 In this case the reanalysis products show more rapid warming than the Copernicus models - the opposite of the situation in the mid-latitudes.  As noted by Cohen et al., the models show warming "more equitably distributed between the Arctic and midlatitudes"; they argue that this is because Arctic amplification favors greater "meridional exchange of air masses" than expected by the models, but I'd argue that the lack of increased blocking means this cannot be the case.