Fairbanks has seen some notably strong temperature inversions lately, thanks to an abundance of clear skies and windless conditions with high pressure aloft.  This is, of course, the time of year when valley level weather tends to become persistently colder than conditions aloft, even during the middle of the day; the sun provides very little daytime heating now.

Here's a chart showing the seasonal cycle of afternoon temperatures at the surface and at the 925mb level, which is about 1800-2000' above valley level (but varies).  I've used data from 1992-2019 for the calculation, because the Fairbanks balloon soundings didn't regularly report 925mb conditions before 1992.  Click to enlarge the figure. 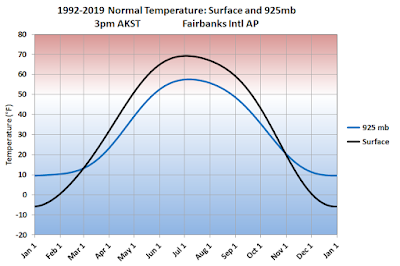 Fully one-third of the year (November through February) sees a temperature inversion, on average, at the 3pm observation time.

At 3am, on the other hand, an inversion is typically present between these two levels throughout the year. 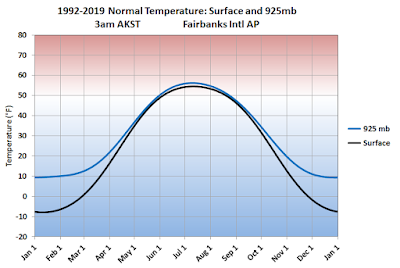 Notice that the mid-winter temperature profiles look about the same at 3am and 3pm; there's not much systematic diurnal temperature range, especially above the surface.

It's interesting to consider how these curves vary with El Niño and La Niña; we're in a La Niña this winter, so might this explain the recent strong inversions?  The answer seems to be no; La Niña winters are often colder, but perhaps counter-intuitively, the inversion is not stronger - see below. 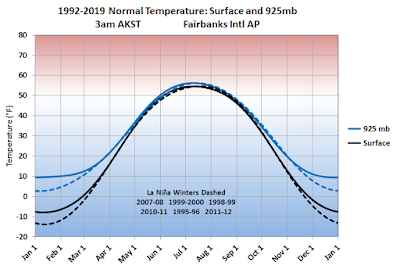 Here's the corresponding chart for El Niño: slightly warmer than normal temperatures, but the departure from normal is not as large as during La Niña. 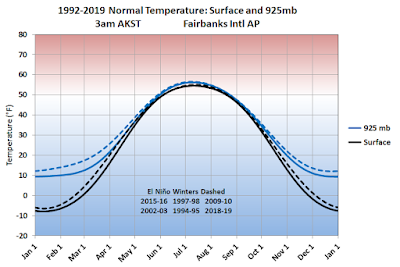 A direct comparison of the surface-925mb temperature differences reveals that the inversion actually tends to be stronger in El Niño winters - see below.  It seems this is because El Niño winters tend to be drier, with more southerly flow over the Alaska Range owing to a strong Aleutian low; so with more clear skies over Fairbanks, inversions are more often pronounced in the El Niño pattern.  In contrast, La Niña tends to bring colder air but also more cloud cover from the west and northwest; temperatures aloft are considerably colder, but there's not as much opportunity as one might expect for inversions to amplify the cold. 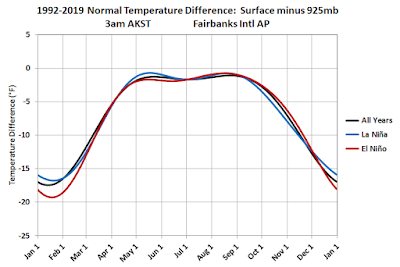 Finally, here are the recent 3am observations in comparison to normal. 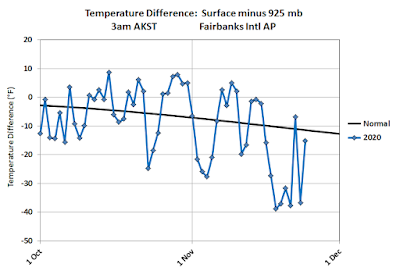 Last week's surface-925mb temperature difference of 39°F is an elite-level inversion; this is only observed on about 1% of days in November through February, and the earliest it's ever been observed is just a couple of days earlier, on November 16, 2014 (with data back to 1992).  The 1992-present record is 53°F on February 10, 2018; see this post for discussion of that event and a climatology of inversion strength at all of Alaska's upper-air observation sites.