In the past couple of days a low pressure system has tracked up the middle of the Bering Sea, bringing blizzard conditions to the west coast of Alaska.  Kotzebue in the northwest had quite an extended episode, with sustained winds of around 30 knots and low visibility for a full 24 hours.  Here's the surface pressure analysis from 3pm AKST yesterday, showing the low near the Seward Peninsula; the storm was then winding down in Kotzebue. 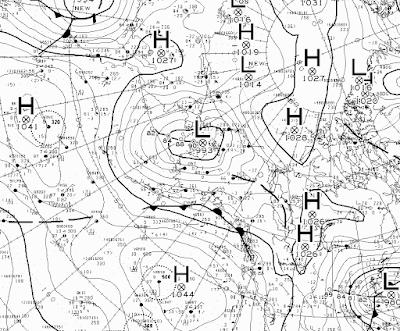 How does this event compare for lengthy and severity to blizzards of the past?  It's not particularly unusual; a quick search of the hourly data shows at least 7 other events with 24+ hours of sustained 30+ knot winds and sub-1 mile visibility.  In terms of extremes, consider the storm of late February 1951: sustained winds reached hurricane force with a temperature near 0°F, and 30+ knot winds lasted for 46 hours.

Here's a chart of the frequency of windy, low-visibility conditions since 1981.  February is the peak month, but it's not too uncommon even in April. 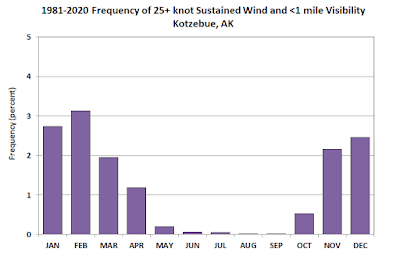 For a look at the Kotzebue weather scene, check out the following Twitter profile:

Here's a page from Kotzebue's monthly climatological summary in February 1951.  Note the remarkable period of persistently high wind speeds between the 20th and the 25th. 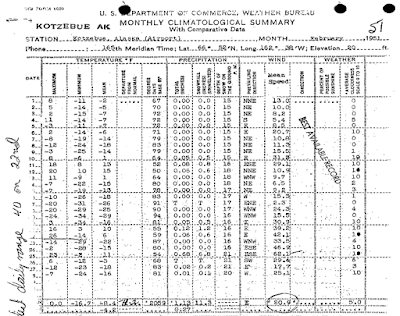 On a side note, the report also includes ground temperature data down to 22 feet.  It would be interesting to "dig up" all this early subsurface temperature data and compare it to modern observations. 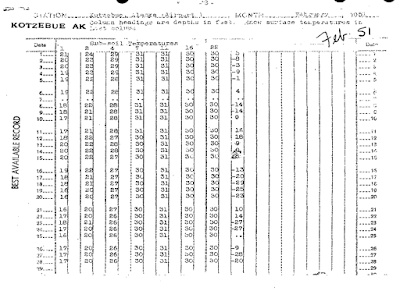