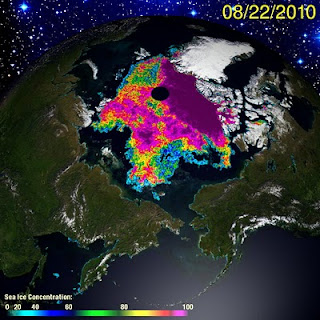 Here is the false color image of Arctic Sea Ice coverage as of Sunday from the University of Illinois's Cryosphere Today web site:

According the the National Snow and Ice Data Center, this amounts to just under 6 million square kilometers of ice coverage, and as of August 16th the total Arctic Sea Ice coverage was third lowest of record, less than last year but more than 2007 and 2008. The annual ice minimum will be sometime in September and will not be far from the ARUS median June forecast of 5.1 million square kilometers.
Posted by Rick at 11:29 AM